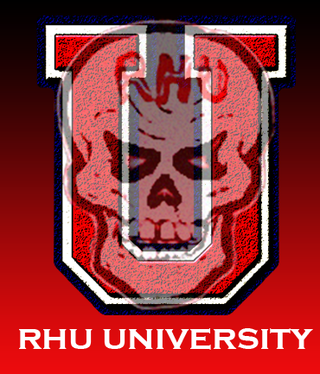 Welcome, once again, to RHU University! Today is a day that may hearken back to visitations you have had with rich family members. Now this isn't to say that being rich makes you like this crusty, nor is it saying that your family members are like this... well, maybe that ONE relative that everybody hates anyway...we all have one of THOSE...

Today we are paying a visit to the most pompous of Custies; that snobby, raucous, primitive little creature that parades about with it's little pointed nose stuck high in the air so that it can act out the delusion that all other beings in the world must be looked down upon. These creatures feel that everything in the world owes them a living, and don't take kindly to scientists proving that the world does not in fact revolve around them. Have you guessed the identity of this walking Napoleon Complex? You guessed right! It's the Entitled Crusty!

Entitled Crustys are difficult to identify if you merely go by their plumage. They can be dazzling and colorful, or drab in color with ratty looking clothes. They can wear all sorts of camouflage in order to look less threatening or to disguise their intentions. Sometimes even their behavior can be misleading: they will appear kind and harmless in the beginning on the interaction. 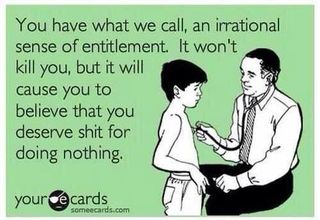 Entitled Crustys are firm believers in the mistaken creed, "The customer is always right!" It is like their penis religion, if you think about it. They have it, they're proud of it, they whip it out in public and wave it around, and they will put a supreme effort into shoving this creed down a Retail Slave's throat. They believe so wholeheartedly in this creed that they will immediately leap on the offensive if this creed even remotely becomes challenged.

In order to appease this creature, Retail Slaves will be expected to bend over backwards for this beast, even if it would mean an immediate reprimand or even termination for the Slave. It doesn't matter how extravagant the demand is. It doesn't matter how ridiculous demand is. It doesn't matter whether the system will allow the demand to be fulfilled. It does not matter that the demand would cost the company money in order to fulfill. If an Entitled Crusty demands it, you had better sodding well MAKE it happen even if it means shooting yourself in the head, climbing up to Heaven and bitch slapping God until he concedes to obey them. They believe that even if this is impossible, you had better MAKE it possible anyway.

Understandably such demands are often refused, and the Entitled Crusty will immediately shape shift into a Bitch or Douchebag. More upon these creatures in another lesson.

It is always a good idea to hone your ability to detect the hidden nature of the Crustys you may encounter. Experienced Crustologists can look at a store full of Customers, Custys and Crustys and pick out the troublesome ones at a glance. Listen to this inner warning system. It can allow you to brace yourself for trouble.

Homework: Think of times when you were ambushed by an Entitled Crusty and the ridiculous demands that he or she gave. Please share it with the class.

Back at the restaurant many moons ago, we did have one who stands out...

Guy comes in and orders. He wants a few modifications to his burger. No problem, but it'll cost a bit extra. Waitress tells him so. "No, I don't want to pay extra. Make the changes and it better be the same damn price!"

"Sir, we can make the changes you want, but you're asking for 3 ingredients not normally included. It *will* cost more money."

"It damn well better not, you bitch!"

[The waitress carefully goes through the modifications he wants, confirming them again, and then explains how each individual modification affects the price.] "And the total will be [price]."

Jerkface stands up and *grabs* the waitress by the front of her shirt, pulling her face within an inch of his. "It will be the price on the menu, you useless cunt. And if you argue any more, you won't get a tip."

Thankfully, the owner, by chance, arrives at the restaurant at that moment. He walks over and pries the jerk's hands off his employee. "Out. We are not willing to serve you."

The owner, who was born in Iran [and came to the US as the Iranian revolution broke out], escorts the jerk to the front door. "The owner. And you are not welcome in here ever again. Now run along."

The rest of the customers applaud, and the owner gives the waitress a $25 bonus for dealing with the jerk.

So the other customers saw that happening, but nobody did anything about it? How depressing...