Burbank Shopping Plaza of Weirdness Meme
Raising A Shed Is Better Than Viagra? 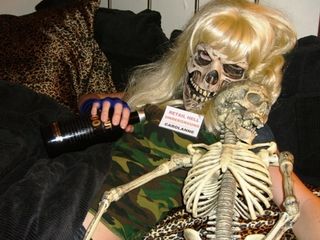 Incoming second wall o' text from me. You have been warned!

So Friday was the day from hell. Started with that bitch of a first customer who yelled at me saying she was going to call the health board and get my fired (as posted in my previous post) Well it gets better.

I work 11-7, day shift people come in, in stages; 2 people at 5am, then 3 I think at 6am, and the rest at 7am. Well 6 am consists of 2 people from management, an assistant manager, and our general manager. I've never been in a workplace that is so painfully highschool that I literally have anxiety attacks going to work.

I never know what I'm getting into when it comes to 6-7. Some days it's great, we all get along, goof around and joke and just have a great last hour of my shift, other days? Fuck no. It's like everyone wants to murder someone, and because I'm nights, I'm the main target. It's a common issue when there are three shifts, day shift is like the next incarnation of Jesus and does no wrong, afternoons is kinda useless but night shift? Clearly you all must be 3 IQ points away from an ant, and night shift is the last possible thing you could manage to get for a job because someone just felt bad for your clearly mentally disabled ass! (Please note, I'm highly intelligent, always read 5+ years about my age level, and was for the most part a high 70% to mid 80% grade level in school).

So my week in general has been hell, I couldn't tell you what I had for breakfast on Thursday after work because I've been in that much of a daze after hearing that my great-grandfather is on his way out of this world. So I've made a few goof ups.

One of them was a coffee spill. Had everything ready to make a new pot of coffee, turned the machine on and walked away. No problem right? Nope, forgot to put the coffee pot under the thing. Yeah, came back 3 minutes later, coffee bloody everywhere!! Thankfully it was slow so I cleaned it up.

Well apparently some of it got into the sugar bin under the counter. It's not as busy as it is on days so I don't fill my sugar machine often (calibrated to give consistent amounts of sugar everytime instead of "yup that's a spoonful") so I didn't notice that there was a small amount of sugar that was soaked with coffee. Plus see aforementioned daze I've been in.

Well my manager flipped shit on me when she saw it after filling the sugar machine. Called me useless, no more useful than a wall blah blah blah. Literally shaking with rage. 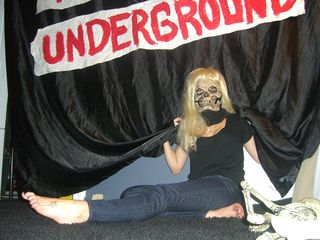 It gets better. I work as a team of 4 on drive thru during 6-7, order taker, window, coffee, and sandwich station. I'm the only night shift person on the drive thru the entire hour. The rest of them are all day shift. So they constantly joke around and I just sit there quietly doing my job. The entire hour they make fun of and belittle my two night shift coworkers, and take their stabs at me on occasion. Friday was no different.

My order taker made a mad dash to the bathroom (been having tummy troubles all week.. It's all good, we all have day where we get the liquid shits and the bowels wait for no one). My manager asked where she went, and I said "I think she's in the bathroom, not sure though."

Now it's busy, I'm trying to do the job of two people during our busiest time of day, and I'm naturally a timid person. I don't know if I said it really quietly, or if my manager just chooses not to listen to me so she has free ammo to yell at me for shit. But when my order taker gets back she flips out how I never say anything since my OT said she might make a dash for the bathroom.

Yeah I'm useless though. Because despite coming in after getting terrible news I miss some random things, so clearly I think I'm going to leave all this extra work for the incoming shift, because I think they are a slave shift. That I can just waltz out of the store leaving all this extra work to them.... Oh, Forgot to mention.. Night shift? 3 staff members. Day shift? I think they have up to 15 people on their shift....

Hey just because you may be feeling more pain Kat doesn't invalidate someone elses. Everyone feels things differently..

sort of annoys me that people think just because someone else broke their arm it makes a simple stubbed toe hurt less. This is a open place for people to voice their pain and gripes at work. From the stubbed toes to the broken limbs.

Though I do hope that the shit storm that sounds to be happening clears soon with minimal casualties.

I'm not sure.. I've seen the whole 'Night Shift always gets flack' thing happen... a few times... hell at my job our night shift person keeps trying to claim it's the day shift doing shit all. It happens from a job or two... checklists are great to help prove you did something and props for admitting that you may have slipped a bit. It happens to everyone we are human.

Let's all post our problems so we can vote on who has it worse and thus has the right to vent. Then let's go off on those who have lesser problems on the imaginary scale we will use. That is what this site is for, right?

you'd think kat would find better things to do than troll a customer service site at all hours of the day.

HEY KAT. GET A FUCKING JOB OR A FRIEND OR A DOG OR SOMETHING.

People deal with stress differently. Just because it doesn't seem like much of a problem to YOU doesn't mean it's not a problem. Some people get a little clumsy and dazed... and some are bitches on a forum.

To the original poster: I've worked nights most of the last 25 years, and I know exactly how you feel. "You're on third shift, you never do anything, so we'll pile all this extra stuff on you to do because the day shift with 20x the people shouldn't have to take time out of their work to do it." Despite the fact that since we work nights, and Europe's morning is our 2am, so we have several countries full of people who suddenly derped their passwords calling at once, and there's only three of us.

I am offended that someone bitchy took my usual name. :(

While I somewhat agree that sometimes life sucks and you just need to deal, this seems to be a big load of 'life sucks' to deal with all at one time. Your manager seems like an ass, perhaps talk to someone else about it? In the meantime, try to find some sort of support. I'm sorry to hear about your grandfather.

And I just cleaned my ban hammer too... Kat, your behavior is not acceptable. Stop being a nasty little troll. Either leave the site, or be nicer. This site is for venting our workplace troubles. You are not an authority here, and you do not lord it over other people here.

I can flex my authority, which Freddy GAVE ME by the way, and I will continue to apply whatever means is necessary until you are either gone, or you learn your lesson.

The internet ate my comment.. Damn it!
Well for all those who are wishing me and my family well thank you. Your kind words both here and on facebook are much appreciated. Sadly my grandfather is terminal, in hospice care and we are just waiting for the end to come basically.
As for trollkat, (although I know you can't see this) My grandfather is fucking dying of cancer right now! His wife also died of cancer. My papa is also battling with cancer. My mother has a bad back, I've got anxiety, PTSD, depression, severe issues with my leg joints, and the list goes on. Yet I'm still at work everyday working my full 8 hours a day, 40 hours a week.
I don't have bad weeks like this usually, my regular customers have nothing but good things to say. Infact after this incident I had a regular notice I was "off" asked what was wrong and when I broke down from the stress after telling him what happened he hugged me and said that if my boss threatened to fire me that my boss could call him! So ha!

(patpats Nice Kat) I was wondering why 'you' had turned into a flaming bitch...

(hugs Canadian Coffee Gal) My mother's second husband just died at the beginning of September. I wasn't real close to him so it didn't bother me much, but Mom was a mess for a while, and I tried to help as much as I could.

She just got some cats, which seem to be helping some.

I feel you. I've had times where coworkers jump off their stations unannounced, and I'm the one getting yelled at for not doing picking up their slack enough.

When things go awry in the bedroom for a man, the problem is often attributed to the physical health of the penis. Psychological factors account for about 10-20 % of all cases of erectile dysfunction.