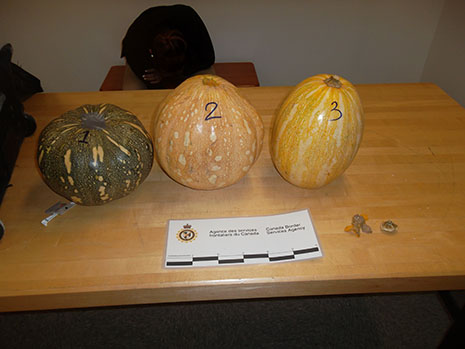 From The Smoking Gun:

The Halloween seizure netted nearly two kilos of the drug, according to the Canada Border Services Agency (whose fine work has previously been detailed in these pages).

The pumpkins, discovered during a search of the woman’s luggage, seemed heavy for their size, so investigators X-rayed them and discovered suspicious masses inside. Further investigation revealed that the pumpkins (seen in the above evidence photo) contained bags filled with the cocaine.

Another CBSA photo shows a white powder on the tip of a knife that investigators plunged into one of the pumpkins.

The cocaine was turned over to the Royal Canadian Mounted Police, which is expected to file narcotics charges against the woman, whose identity was not disclosed by investigators.