Pizza Hut Is Being Sued Because The Delivery Fee They Charge Custys Doesn't Go The Drivers
Funny Food Trucks: That Sounds Like An Insulting Nickname

Entitled Custy Hell: "You Should Know That I'm 18!" 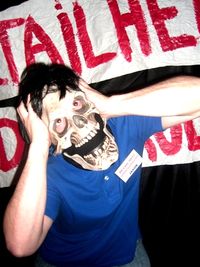 I had a kid bitch for nearly five minutes about how he was obviously old enough to buy his chew and oh my god you don't have to card me, god.

I finally got his card (he had spent a good two minutes of that slowly pulling it out) and saw he had turned 18 two days before. As in, he still had his under 18 drivers license with the words "Turns 18 on <date>" in big bold letters.

When I pointed this out he scowled and snatched the license back and said something to the effect of, "Exactly, you should know that!"

If I had been working there longer at the time, I would have told him to shut up and leave at the two minute mark. And definitely refused him the sale after his snatching episode.

It's not like we had a hard time selling green Grizzly chew to the rest of the county.

Can't stand people who think that I should know their age. Looks can be deceiving, I tend to judge people either too young or too old, anyway, and with my looks can still be taken for 17, so I know to never let looks alone tell me anything.