AirBNB Hell: French Artist Refuses To Pay Host and Leave, Spray Paints the Word "Bitch" on Her Front Door
Sidewalk Signage on the Danger of Being a Parent with Kids Who Have Legos 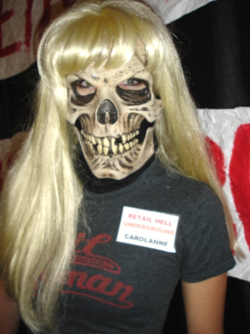 Well, we were told that we didn't have to explain all of this to customers. Simply to say, "We're not allowed back there today," should suffice.

But being sassy little things, a few coworkers and I came up with our own reasons for not going back there. We at first tried to come up with reasons that would be ridiculous, but believable. However, no customers asked why we couldn't go back, so the ideas were just ridiculous. Among them were:

I'm sure there were a few more, but it was a few weeks ago during a closing shift and I can't remember them all. We just told them to each other back and forth throughout the night; it kept us going.