Deli Hell: Custy Caught on Camera Slapping and Punching 10 Year-old Because She Did Not Like His Manners

A boy in the Bronx got a beating he did not expect. A woman chased him, slapped him and ultimately gave him a bloody nose in a bodega.

Trying to teach a youngster some manners should not deteriorate into a police investigation, but that is what happened to the 5th grader who was struck repeatedly by another customer.

"She slapped me two times, I punched one time," Mohammed said. 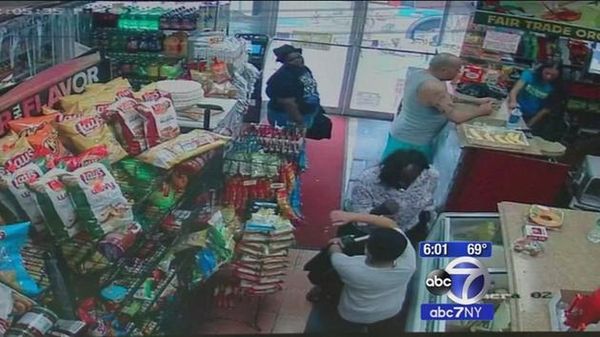 "Indescribable for a father to see your son chased and beat up," said Ibrahim Almontsire.

The slaps and punch occurred inside the family's deli on East 206th Street in the Bronx. Mohammed went in to pick up a bag he had left earlier, He says the lady ordered him to say thank you.

"I told the lady it's none of her own biz, she said she has better grandsons that respect her and have better manners," Mohammed says.

It got worse from here. WABC-TV in New York says the woman decided to teach him manners - with her hands and fist.

"The way she punches him around, he was very helpless," Ibrahim adds.

Police are looking for the older woman who was captured on the security cameras terrorizing the helpless boy.

The owner says that he did not recognize the woman as one of his regular customers. A person of interest who was with the suspect is described as approximately 25 to 30-years-old, last seen wearing a hat, a black t-shirt with a design on the front and a black t-shirt.

Dear dad, if you raised your kid to be polite and know about using simple courtesy, it wouldn't have to end with other people teaching your kid that NOT being those things is NOT okay.

Okay, punching the kid was unnecessary, but a good slap I have nothing against. 'specially if the little brat starts 'dissing' me.

It's his family's store, he's just retrieving his own bag from behind the counter when a stranger accosts him making assumptions about his perceived manners for no good reason. Of course he's going to be rude back!

The old fart should have minded her own business and seriously, getting that furious over a kid not saying thank you? Wow. I wonder how many times she beat her own kids until they were all black and blue. They probably are so terrified of her that they never dare open their mouths around her. Reminds me of when an old fart pissed me off when she wanted me to say "please" to a bunch of brat teenagers who were goofing off while on the job. I was their boss, and they had been asked with pleases plenty of times to knock it off and keep an eye on the spawn. When one kid fell off the ride and bruised himself that's when I yelled at the teens to either straighten up and do their job to get their community hours, or gtfo and take on a different job with double the hours. It was their choice. When I got back to the table the old fart was all, "People don't like it when you tell them what to do. If you had said please, and asked them to they would have listened." I bit my tongue so I wouldn't mouth off at her, but in my mind I thought, 'If it's that easy why didn't you ask them you old bat?' The old bitty was in charge of something else so had no connection at all to the teens. She just wanted everyone to smile and say please and thank you, and of course I'll do anything you want because you said that. Psh, yeah right.

That person was so past the line you can not even see the line anymore. If some stranger had pulled me up on my familiar behaviour with my mother/father (which to the casual observer would have been extremely rude but was actually based on tone of voice and body language) I would have gone ape at them, too. They had NO right to lay a finger on another person's child least of all one that wasn't doing anything wrong.

Fucking hell that stupid moron needs a few slaps herself.

If this had been at my store, I would've told the woman to get out. As Melissa Etheridge would say, "To hell with the consequences!"

NO ONE hits a child in a public place like that, especially one that isn't their own, and gets away with it. Sure I could call the police, but that would result in a huge ass headache for everyone involved, and most likely a slap on the wrist.