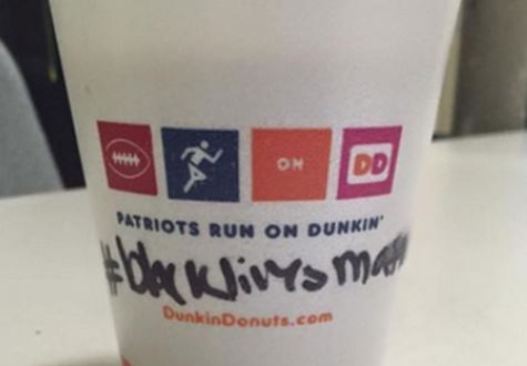 The union called the move "unacceptable and discouraging."

A Rhode Island police union is outraged over what a Dunkin' Donuts employee wrote on an officer's coffee cup. According to Go Local Prov, a Providence police officer purchased a coffee Friday night from a local Dunkin' Donuts. A Facebook post (which does not appear to be public) from fellow police officer William O'Donnell claims that the employee was "immediately rude, and didn't appear to want to serve" his co-worker who was in uniform. Upon leaving, the unnamed police officer noticed that his coffee had "#blacklivesmatter" scrawled across it in marker.

This did not sit well with O'Donnell, who suggested getting coffee from another chain: "Would you drink it? My suggestion... absolutely not, go to Starbucks. When is this silliness going to end. But if the store gets robbed she'll be calling us immediately to help AND we will because that's what we do!!!!" 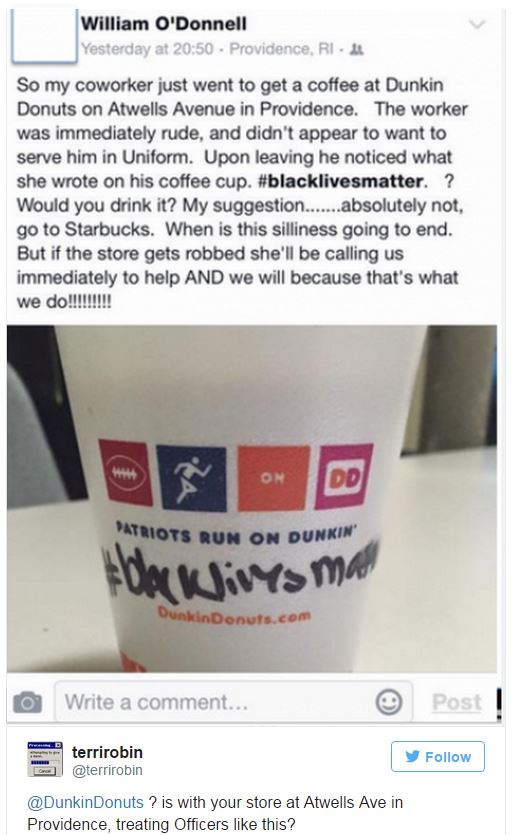 The move upset Providence Fraternal Order of Police Lodge #3 as well, which according to Boston.com, is the union that represents "both active and retired members of the department." The union held an emergency meeting on Sunday and then released a statement "condemning the employee and the Black Lives Matter movement": "Providence FOP #3 finds this action to be unacceptable and discouraging... The negativity displayed by the #Blacklivesmatter organization towards Police across this nation is creating a hostile environment that is not resolving any problems or issues, but making it worse for our communities." The union ended their statement by proclaiming, "ALL LIVES MATTER."

The incident comes just a month after an officer in uniform was allegedly denied service at an Arby's in Florida. An employee supposedly told the officer that he did not want to serve her "because you are a police officer." The employee was eventually fired. Just a few weeks later, a Whataburger in Texas faced a similar issue. An employee was fired for refusing to serve two police officers. She reportedly told the two men, "We don't serve police." Check out the full statement from the Providence FOP #3 below:

On October 2nd, 2015 at approximately 3 pm, a member of the Providence Police Department walked into the Dunkin Donuts located at Atwells Ave and Bradford Street in the city of Providence. This officer was getting a cup of coffee to start his shift. The officer was in a Providence Police uniform representing the Police Department and Providence Fraternal Order of Police Lodge #3. The officer ordered his coffee and found the worker to be somewhat rude and appeared as though they did not want to serve the officer. Upon leaving the establishment, the officer noticed a message written in black mraker on the cup, #Blacklivesmatter.

Providence FOP #3 finds this action to be unacceptable and discouraging. Members of this Union, who represent active and retired Providence Police officers adamantly, believe that ‘all lives matter'. Our officers, like all other Law enforcement agencies work tirelessly to protect and serve all members of the communities. The negativity displayed by the #Blacklivesmatter organization towards Police across this nation is creating a hostile environment that is not resolving any problems or issues, but making it worse for our communities. They are doing this by increasing tensions amongst police and the people they serve. 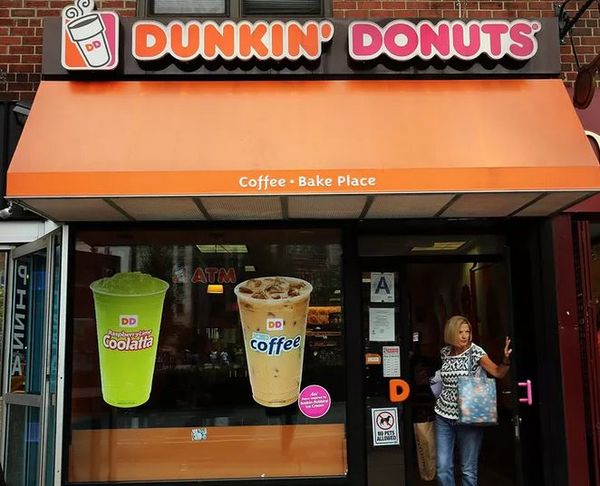 Fuck this employee. Fuck them sideways. (I don't want to start the debate on the thing, so this is the main thing to get across)

GOOD FOR THE EMPLOYEE!
"We are also concerned by the action of this employee who created a perceived safety issue to our officers." Seriously? If police feel threatened by a hashtag, that might explain why they keep killing unarmed black people.

Pagan, if you're opening this up, I'll give my statement: I have the feeling that if a policeman had killed a white person, nobody would make this much of a deal out of it. Everyone needs to stop putting blacks over whites, just to balance out their terrible past. Said past is centuries ago. Let it go.