Horrifying Products: Roadkill Cat Figurine
This Woman Has The Most Terrifying Job In The World, And It Looks Amazing

Many years ago, I used to work for a company who had a pooper in the bathrooms as a repeat offender issue. Based on the times it happened, it was deduced that it was an employee and not a customer (the sales floor was usually closed when it happened).

A brave employee staked out the restroom all day, hiding in a stall that was marked as out of order.

He was fired the next day.

It's funny today. Hell, it was funny when he was busted. But damn, walking into a stall and being blindsided by a volcano-shaped pile of turd was awful. I honestly have no idea how a human being can produce that much shit on a daily basis.

The guy was relatively tall and skinnier than average. Maybe his secret was that he could eat whatever he wanted, with any caloric surplus converted to feces instead of fat cells.

Before anyone asks, no, he did not give a reason for why he would do that. The thinking at the time was that he might suffer from Coprophilia. But really, nobody knows.

The problem with a workplace issue that potentially involves a mental disability is that it could become protected under the Americans with Disabilities Act. Since this involved vandalism, it likely would not be protected, but everyone played it safe and did not really push for an explanation. 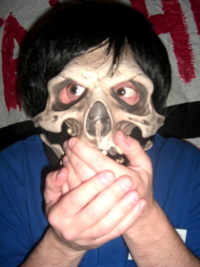 If he was not crazy, then my guess is he had a serious problem with the company or someone who worked there. During my tenure there, I saw cars get keyed, minor shoving matches, grown men crying because they didn't get a raise, no call / no show quitting, people talking on phones, pretending customers were on the other line because they didn't want to work, parking lot and break room sex, religious zealotry, etc.

But really, fuck this guy and all who desecrate public restrooms. It's sad when people have issues, but terrible when they take it out on society.

You know, now that I'm reflecting on it, this was not really a good place to work.

Mr. Lazy did this a LOT. I know it was him because it always happened on nights when it was just me, him, and one of the supervisors, and it ALWAYS happened when I went in after him!

One time I almost got fired for it, because the night before he'd done it, and the CEO of the company was coming to visit our store that day. The supervisor thought it was me because I'd been on the previous night, until I reminded her Mr. Lazy had been on and that it was discovered after he'd been in there. I got off the hook.