Bathroom Signage: Gary Hates Tampons
Because The Roof Is A Good Alternative? 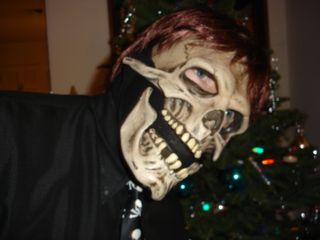 At the Doorbell Cosmetics store, we sell four kinds of shower gel:  The “All-Natural” and “Soft Skin” brands are packaged in tubes with a hook on the top, so that you can hang them on the showerhead.  Then we have premium men’s and women’s products which are packaged differently and displayed in a different part of the store.

We were selling the All-Natural and Soft Skin brands at the price of 4/$7.00 during the Christmas season.  The premium products were being sold at their regular price of $4.00 each.  There was a big display on the table in front of our shop, and large signs next to the hanging shower gels.  These signs specifically stated that the products on sale were the All-Natural and Soft Skin varieties only.  There were also signs near the premium shower gels stating their price per item.

Four times in the first day of the sale, customers read the signs and went straight to the other end of the store to buy premium shower gels, and then pitched a fit when they were not given the sale price.  Each time, I showed them the signs stating the terms of the sale, and each time they said that the signs were unclear.

Four times on Day Two, customers came up to the register and demanded the sale price for the premium products.

On Day Three, all the signs came down, and everything was back at its regular price.  Owning the store has its perks.

Customers are illiterate, you know that.

Selectively literate. They read '4/7$' and avoid reading the 'not what you want to buy' part.