New Stores On The Block: Does It?
Elf Mishap at Santa's Workshop

LGBT Retail Hell: Fired For Being A Lesbian.. I Mean For Being $0.05 Short 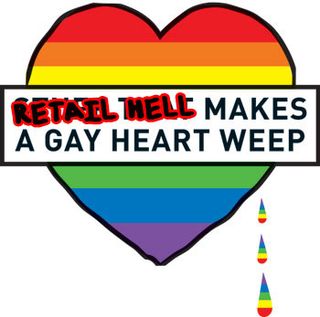 My very first job was working in an ice cream parlor in a small town. I earned $2 an hour plus tips (which were supposed to be split between the two cashiers.)

First issue was that the owner was OCD about streaks and the entire make table was mirror finish stainless (as were all the appliances and the counter top) She wanted these wiped down with bleach water every few hours, which left streaks. Streaks were unacceptable, everything must look brand new and shiny all the time!

I was told to wipe down the outside of the make table at a specific time each day, this happened during a busy time once and I did the initial wipe, leaving streaks behind before serving the next customer. I got yelled at, called names, and told something to the effect of, "I'm sorry if this job is too difficult for you, I shouldn't have expected much really."

That night, because I screwed up, I was told that the tip jar was off limits to me.

The next day, I tried to get into the storage room which was down a very narrow hallway. Another employee was coming down that hallway and bumped into me. We both apologized and I thought nothing of it. I saw her on the phone later, and she sounded pretty upset, she left after that.

When I went in on my next scheduled day, I was told again that the tip jar was off limits, I was being punished for being 5 cents short in the register the previous night I'd worked.

I got a call at home that night after leaving. The owner told me that the place was a family establishment and people like me didn't fit in there because we make other people uncomfortable. She said "I'm not letting you go because you're a lesbian, I'm letting you go because you were short 5 cents, you can't clean worth a damn and your unusual style of dress makes you stand out too much."

I found out later what happened from a friend who was related to the girl I bumped into. The girl heard a rumor at school that I was a lesbian. Apparently she had complained when I was hired and was told that if I did anything to make her uncomfortable to call the manager. She did, and told her that I bumped into her and that I rubbed up against her, touching her ass in the hallway. She told the owner that if I wasn't let go, she was going to quit because she didn't want to be sexually harassed all day long.

I worked there for about 5 days before they fired me. What's worse is I was too embarrassed to tell my parents why I'd been fired, they assumed I was just a fuckup and they were disappointed.

"No, this totally has nothing to do with your sexual orientation. Definitely not. In fact, I'm only mentioning this, because we're a family establishment - we actually don't care that you're a lesbian. But seriously, totally not the reason why this is happening."
I haven't seen suspiciously specific denial like that in a while.

Honestly, five cents? Who in their sane mind would buy that? Now, I had one time early in my first retail job, I was short FIFTY Euros. Yes, that was huge and I have no idea how that could have happened. THAT I might understand as a reason for being let go. But five cents? I was told that anything below a dollar or so, it didn't matter.
And as for your 'sense of style'? Hey, establishment, ever heard of a WORK UNIFORM to avoid such a problem?