80's Toys That Suck: Hit Stix
New Stores On The Block: Dude, Chill Out With The PDA...

Retail Hell Frozen Over: Crusty Apologizes For Her Behavior 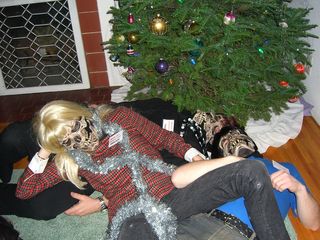 I had my first ever custy apologize to me about two weeks ago now.

She came in with an expired receipt and wanted a battery change under warranty, which I very politely explained that the warranty had expired so I'd have to charge her.

The last person who had changed her battery wrote "Final change" and the date meaning that was her last change before it expired, but she took it to mean she got one more. She got all pissy, but then took out another watch asking how much that one would be.

When I told her she went ballistic on me! "This is ridiculous!"

You know, the usual.

I tried to explain the warranties, and told her she could use her coupons for the new batteries, but she wanted what she wanted. Then she left saying, "I hope you get a lot of business," really snippy.

She came back an hour later, a completely different woman. She apologized over and over and said she had thought about what I had said and realized I was right, and she was in a better mood now because she had eaten.

Then she tried to make small talk while she waited. She heard me say something about being pregnant to my co worker and was all, "Oh when are you due!"

It was the strangest thing ever, though only because it had never happened before. I wish it happened more often.

Well, being hungry can really lower a person's mood and patience.

I've had a bad case of the hangry myself, before. (Hypoglycemic - if I don't eat when I start feeling off, my mood rapidly nosedives.) I can sympathize a bit, and I'm actually impressed she came back later and admitted her mistake.