Coworkers From Hell: I Am God Around Here! 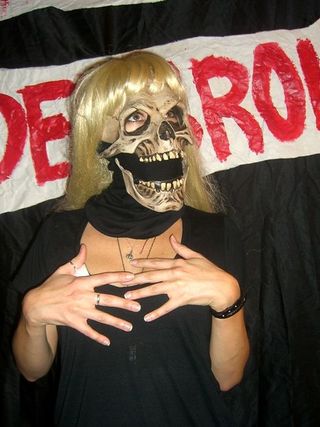 My store only has five cashiers, one of whom I will call Sherry. Sherry is an older woman (the rest of us are around college-aged). She's been working at the company for nine years and she is still a basic cashier, if that tells you anything. My district manager has made it clear that he never wants her to be a shift supervisor or manager because of her attitude.

Anyways, in Sherry's delusional mind, she is a manager. She constantly bosses people around, she'll go up to our managers and say "you need to go to the bank right now" or "you need to take your lunch right now before you go over on hours" to which they give her a 'who the fuck do you think you're talking to?' face.

She bosses the rest of us cashiers around like crazy. Everyday I come in I have to deal with her telling me "I need you to get X done before the end of the night, I need it done." She never knows what the hell she's talking about and typically X is some minuscule thing that doesn't need to be done for another week and I've got other important shit to do.

She always runs away from the register to go hang around the real managers and she "tattles" on us. Luckily for me, I'm our top cashier and therefore my managers know that I'm not doing any of the stuff that she says. She's frequently told them that I'm lazy and that work won't get done while I'm there. They just blow her off.

Also, an incident happened the other day that blew my mind. I'm a trainer and had just recently trained a new cashier. Apparently this poor girl had to work with Sherry the other day. Sherry proceeded to tell this girl a million things to do, the girl decided to stand her ground and say that she's only supposed to do the tasks that the supervisors assigned her. Sherry proceeds to tell her that she is "head cashier" (a title that doesn't even exist) and tells her that she has the same power as our supervisors.

I was dumbfounded that she had the balls to do this.

I wish they'd fire her but it's hard to fire someone who's been with the company for almost 10 years just because she doesn't get along with people. :/

Honestly any time you were asked to do something by her, I'd ignore her and move on. Let her keep running to the managers until they finally decide she isn't worth the time of day and fire her ass. If she is on the same pay grade as you, she doesn't get to delegate anything to you.

I had one like that at my shop's previous incarnation. She was this tiny, little old busy body, she knew everything even though she hadn't worked with us very long, she would punish you if you made her do something she didn't want to and she would show off like a little, spoilt girl if she didn't get her way.

When we changed hands the first time she came with us, unfortunately, and got worse, much to all our shock. She acted like she was the assistant manager when J was and would get loud and stroppy when J asked her to do anything she hadn't already decided was "her" job.

In the end she had a week sick for "depression" due to the stress of J bullying her, read that as she couldn't boss J about, but her doctor wouldn't sign her off with a sick note for work so she ended up resigning to make a point. I have a feeling she was waiting for our manager, M, to beg her to come back. Instead he bought us coffee (I had hot chocolate) and we were all singing "Ding dong the witch is dead" all day.

I'd say bring this to the attention of the higher ups, because if she's pulling this kind of shit, you could have her fired for slander.