You Had One Job Sign Guy
Awkward Asian Wearable Wednesday: I'm Pretty Sure "Fart" And "Sexy" Don't Belong Together 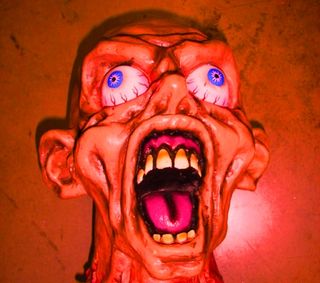 I worked at one of those large chain restaurants that's basically fast food with service. I didn't hate it, I had some really solid co-workers who were fun to gab with and made the whole ordeal of being a server much more bearable (RE: Asshole customers who take out their unhappiness on chipper servers).

However, we had one co-worker whom I can only describe as a Creepy Creeper from Creepsville, Creepsyltucky. Dude had been in prison, was clearly mentally off, had no teeth (NONE), and for some reason worked FOH. The guy, let's call him Steve, had a horrible habit of violating personal boundaries with both female and male employees. I mean ALL UP IN YA' SHIT, Steve would grope women "by accident" or press himself as close to your body as possible when there's plenty of room to spread out. He also reeked, ugh.

During the time I worked there, a little over a year, he was there for at least 9 of those months, having already worked at the store for a year or two. This was with a venerable cornucopia of sexual harassment complaints surrounding him. I even had an incident where Steve snuck up behind me, lean into me, and proceeded to rub my shoulders without asking or anything. I freaked out and he got offended because he was "just trying to help." Ewwwww.

Anyway, eventually Steve goes too far. A girl was bending down to put away a dish tray and he snuck up behind her pressing crotch to ass so that he could reach over her to put away a single glass. Because there was no room...in the GU...on a monday night...with four servers on duty...yeah, sure. He stayed behind her for the full 5-10 seconds of horrible contact and awkward realization and was once again offended by the girl being upset with him.

A week later Steve tells the one gay guy at the store that, because he has no teeth, the men at the prison liked him more 'cause "no friction." Have you gagged in your mouth yet, RHUers?

Basically a large portion of the serving staff filled out numerous harassment slips and my managers forced the company to fire him. In the middle of Steve's lunch shift he gets pulled into the office and lectured by our GM and (first one in a while, which is why I think there was a push to get him fired) new female manager.

He finally leaves the office, clocks out looking upset and VERY confused, and leaves the premises.

Later that night one girl gets a text from him saying he got fired over "lies and bullshit."

The girl he texted? One of the BIG, BIG harassment claims that got him fired.

What a creep, hope he goes back to jail, or a nice psych ward.