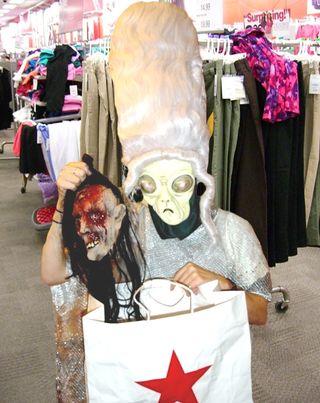 I'll preface this by saying this is an installment of lunatic tales from my now ex boss.

I was working a few days on with her, and a few days with a coworker. I really looked forward to these days, as you didn't have to spend your day creeping around the shop like a hunted animal. You could also play music, and have a laugh with customers without feeling imaginary daggers in your back.

This was one such day, and it was about lunchtime. Another bonus of not working with her was the chance to have a full half hour lunch break. I could have asked my coworker to pick up some food for me on his lunch break, but he was a lazy git and had a habit of disappearing for an hour on his break. Or longer if I asked him to get me something. I ran across the road and into a local shop. Ten minutes later I get a phone call from my coworker.

"Hey doglady, just warning you that She Who Must Not Be Named just called the shop. She said she saw you walk out ten minutes ago and wants to know where you are."

Ooookay. A bit creeped out and a lot panicked now. It was her day off, wasn't it?

I get my food and jog back to work. Apparently boss lady had called again while I was out. It was now eighteen minutes since she had last seen me. The idiot in me decides to do something stupid. I walk into the bottle shop next door (don't worry, I bought water), and say hi to the guys working there, how's business etc...

As soon as I wander back into my work, boss lady is there. She was worried, as I had been away for apparently twenty minutes. I asked her if it was a problem leaving my coworker in charge while I duck out to buy food, and she laughs and says, "Oh no, doglady, you need to eat more food, it's fine by me. I was just worried because I didn't know where you had gone."

That's not exactly what I'd call proper boss behavior.

I've told her to mind her own damn business. Off the clock = no one needs to know your whereabouts.

I sincerely hope you reported.

I hate the customers who think everything you say is sexual in nature myself and this misunderstanding is reported to the boss who misunderstands too. I ask people if the pillows they buy are for sweaty pillow fights. I mean children have pillow fights and these managers are so busy looking for the bad in people they don't see the good!