Drunk Custy Encounters: Delivery To A Drunk With A Dog 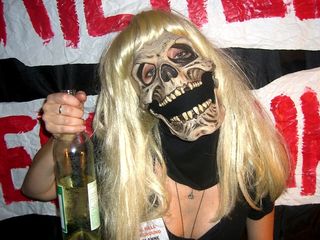 It's graduation weekend in my college town, so we've seen an increase in delivery sales (I work as a driver for a company that specializes in hot and greasy late night food) and along with that comes a more than usual amount of interesting and annoying deliveries.

I've had my fair share of weird deliveries, people having sex, getting offered drugs, taking the celebrity shot in beer pong, watching the majority of an episode of Eastbound & Down on a particularly slow night, etc...

Anyway, what happened last night was a delivery to a regular who I could tell was very drunk since I took the phone order. I informed him that wait times were getting close to an hour for delivery because of the massive influx in orders directly following the bars closing for the night. He says it's fine and orders his food.

Finally, his dog emerges from a back room and comes up to the screen door, I get low to say hi and it immediately growls. I keep talking to it, it barks in reply. I say it's owner's name and it instinctively goes over to him on the couch, but then comes back as I keep talking and it barks at me in reply. That's when it hits me, I can probably get this dog to wake up my customer. 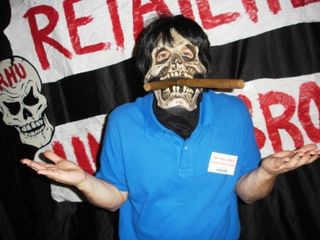 "X is a piece of shit" Bark. "X is a lazy fuck who can't even stay awake to eat his greasy gross food" BARK. "Yeah, yeah, he's a effing idiot" BARK BARK BARK.

Magically, the guy stirs and looks up bewildered at his screen door to see me leaning against the frame smiling directly at him while talking to his dog. He manages to stagger up and retrieve his wallet. He throws me some crumpled money and doesn't ask for change back. As I turned to walk down his steps I realize he gave me four dollars, to cover his cost of $5.30.

I quickly mount his stairs again and knock on the door. BARK BARK. He answers, somewhat irritated, and I explain that he only gave me part of the cost. He angrily scrounges for a few more bucks before handing me a wad of cash saying "this is eighteen, just fucking take it". As I make my way to my car, uncrumpling and counting money along the way, I get to the total amount. The four dollars he handed me initially, plus the "eighteen" more totaled to a nice hefty twelve bucks.

As I started to drive away I heard his dog barking and it made me smile.