So after the last incident with Ray and his lovely mother we had more issues with dear Ray. He "blew out his knee," which we never take as a small thing, so he was out of work for almost two weeks with no eyebrows raised. (Why quotes? I'll tell you later but keep it in mind as you read....). When he was finally 'cleared' to come back two things happen.

Number One: The day he's scheduled to come back after his time off, he calls out. No notice before hand or anything but for his reason there really should have been, so we could find someone to replace him.

Why call out? He is playing some important role in a christening for his aunt's baby and he CANNOT miss it.

Well my boss thought that was all well and good but informs him that he knew he would be at this christening when he was scheduled to be back, so he should have told us. Ray had now been gone more than two weeks.

Number Two: He comes in with a note the day after he called out. It reads that since he hurt his knee he can't stand for long periods of time and will require frequent breaks during his shift.

It's not a doctors note, it's a Mommy note.

Everyone in the office just stares at it with WTF written all over their faces.

So as you can imagine my manager gets this and finally gets a taste of Ray's mommy dependence. He laughs it off and instead of scheduling Ray, he tells him to come in when he's fully healed and can work through his shift.

Mommy is not happy with this. She comes down and tries to insist that my manager give him regular hours and that we're 'discriminating' against her son for being injured.

My manager flips on her. He tells her that we're not discriminating against anyone. Our cashiers stand for six hour shifts with one fifteen minute break as our state's labor law requires. We simply cannot have a cashier who needs to constantly get off his register to sit down whenever he feels the need to. It wouldn't be fair to the other cashiers nor would it be fair to the customers who would have to wait in lines due to a shortage of cashiers. He informs her that there are no other jobs in the store that don't require constant movement or standing. (The registers are too small to accommodate his body and a chair anyway; thankfully my manager didn't add this fat ass fact.) Plus, he informs her in cool professional tones, having a teenager work while injured doesn't seem like a good idea, so he won't be scheduling Ray until he comes in with a doctor's note saying he's good to work.

She looked sort of stunned at first, then hell fire rose up behind her as she got over her shock. Sadly she didn't say anything back, but I kind of wish she did. It would have been a youtube epic. She just huffed and puffed her way out of the store.

We got another visit from Ray later. He comes in with a professionally addressed envelope with a well-written note tucked inside. I'm pretty sure my manager just about pissed himself, laughing.

This wasn't written by Ray. We can already tell by comparing the style of his previous notes and this one that it's another glorious letter from Mommy. The letter reads: 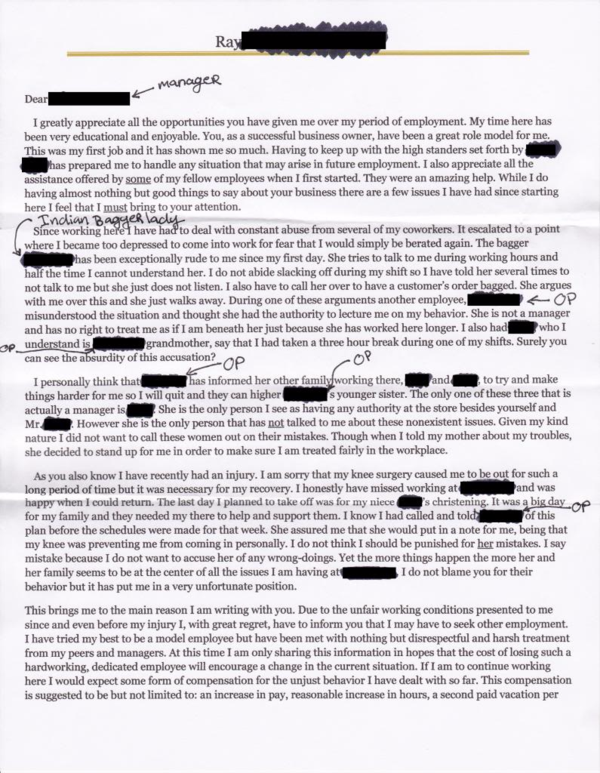 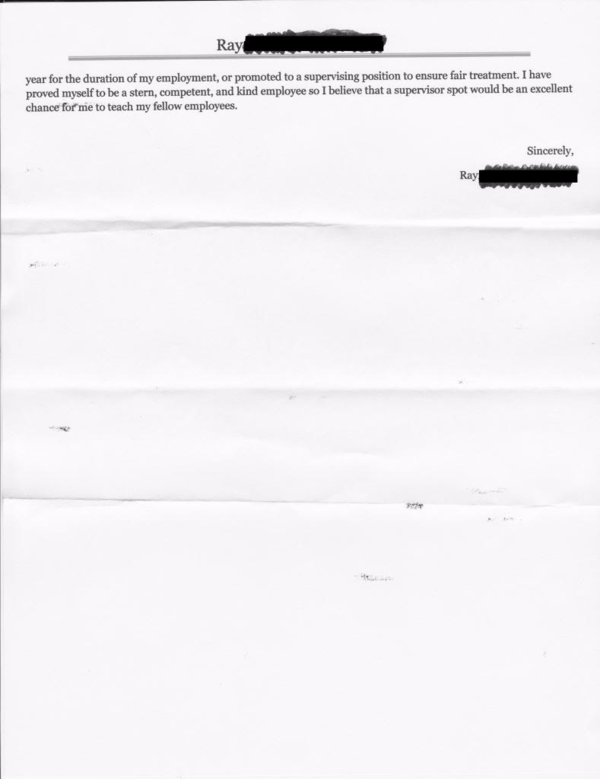 I love when people try to make an intelligent sounding letter but overlook using the word "higher" in the place of "hire." He also has very "high standers." Someone was trying very hard. 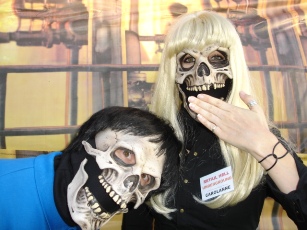 Just to clarify though, I never got a phone call regarding Ray's needed day off for his niece's christening. But he pretty much just blamed me for it. Nobody took that part seriously, of course.

Seriously... WTF!! WTF WTF WTF WTF?! What is in this woman's head!? Is she just high on her son's suckage or something? I honestly don't know...

My boss asked everyone how he should reply to this letter. Half of us, me included, suggested three pages each just containing a single "LOL" right in the center. The other half just wanted him fired.

Anyway, shortly after this, Ray quit. He quit on the day he was scheduled just so he could be fired. Cue the bells, chorus of angels, and homemade cookies falling from the sky!

Yep, he quit because of his "knee injury." Remember the quotes? It's time to call back to that.

Actually, it turns out that he quit because he had a new job at Rue 21 for a few weeks, which another employee told us about. The start date of his job just happens to correspond with the time of his "injury." Go figure right?  I pray for the managers and employees there. I'm also laughing my ass off that they hired him in the first place.

His mother had to come in and tell our boss that he wasn't coming in anymore and kept bringing up something about "lack of action." Read: We didn't hand his "compensation" to him at all, much less on a silver platter.

Some parents are beyond insane!

He's going to get fired from that new job too. XD

"It's not a doctors note, it's a Mommy note."
And unless mommy IS a certified doctor, they get ignored. Doctors trump Mommies.

As for the letter, had I seen and read that, I would have pointed at Ray and laughed out loud for at least 5 minutes. Depending on how much air I can manage. And then tell him to bring mommy in so I can laugh in her face, too.

I wonder if Ray could get in trouble for having worked two jobs, without informing each other...

"I wonder if Ray could get in trouble for having worked two jobs, without informing each other..."

That really depends Lightning, on where the story takes place, laws in the area, and the various company policies. I *think*, but cannot claim because I am not a lawyer, that anti-moonlighting policies are a violation of most US jurisdictions laws because outside work I should be free to do whatever... The only anti-moonlighting a company can insist upon would be if your employment at one job can reasonably create a potential or perceived conflict of interest at another job (generally the two companies must be in a direct partnership or must be competitors). Since Rue 21 is clothing and groceries are not competitors, no such conflict of interest is reasonably perceived.

However dishonesty of this level would be an offense worth of termination generally. He lied to the grocery store about an injury to start a second job. If he lied about his employment history to Rue 21, such dishonesty in the hiring process could be used to justify termination.

Heh. :) If I was the manager at the grocery, I'd feel obligated to let his new job know about his injury, wouldn't want to overwork him now...