Tales From The Knife Store: Trial By Combat 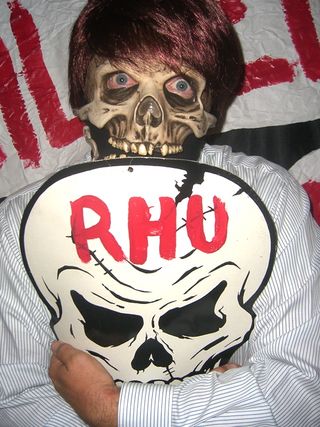 I'm not great with faces, or names, or basic human interaction in general, so I usually remember what a customer bought more than the customer themselves. Some people thought it was funny to be called by the item number of their last purchase, others not so much.

But I remember one guy kept coming in, looking around for a few minutes without actually looking at anything, giving sideways glances to back of the shop or at me, then leaving. I'm pretty sure he's casing the joint.

One day I've about had enough, so I don't leave him alone. Just following him about asking business questions or tidbits about an item that looks like it should be in his line of sight. He flits between ignoring me, grunting, and dodging the question.

Me: "Okay, you've been coming in here a lot lately and not doing anything except look suspicious. What's the deal? [Silence] Right then, new plan, leave and if you come back I'll either call the cops or show you what your insides look like. Capiche?"

He left and I figured that was either the end of it, or a start of a lot of paperwork. Neither as it turns out since the boss comes over later that day.

Boss: "Hey, I just got off the phone with your secret admirer. That guy that's been coming in and not buying anything? He's be pestering me about a job, said he'd be better at it than you. He's been hanging around to watch you screw up to make his case. Today was 'the last straw', whatever the f**k that means. I told him if he wanted your job so bad, you'd have to have a good 'ol fight to the death. I could sell tickets, take bets, it'd be fun. Guess he wasn't interested since he hung up."

It became a running a joke afterwards that any applicants had to fight me. Two actually did, so we hired them as on call people for when we did off site shows and the like.

For those wondering about the ones that choose to fight, we did a hand to hand round before a weapon round. Reason being I didn't want to open up any equipment if they didn't get past the first part. One guy was pretty good but liked showy moves. Pro tip, stay on the ground, you have no balance in the air.

The other wasn't good, but he was a good sport about it and didn't get mad. Both ultimately gave up after taking a few hits from a shinai; they don't do much damage but they hurt like hell. I don't like fighting with bokken or hardwood anymore since I've got a finger that doesn't go straight these days due to an unrelated bout.

What a dumb ass. XD