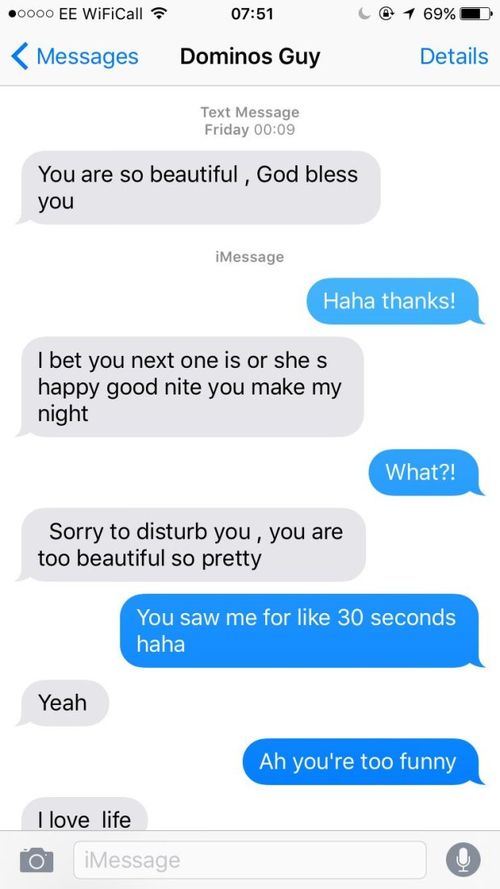 A creepy Domino’s delivery driver was sacked after bombarding a woman he delivered pizza to with ‘freaky’ text messages.

The driver was dismissed after Imogen Groome, 22, was inundated with love notes on Friday night. 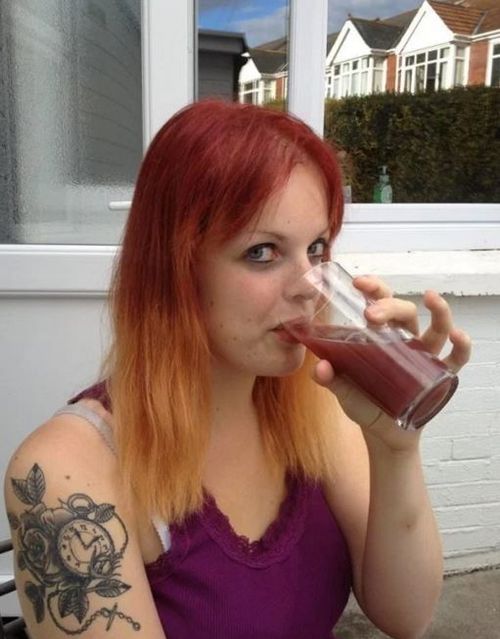 The graduate from St Thomas, Exeter, met the delivery driver after she ordered the pizza around midnight.

After the exchange, she got inside to eat her snack, when a text came in from the same number which said: ‘You are so beautiful, God bless you.’

The messages carried on until yesterday morning when Dominos began investigating the incident.

Imogen said: ‘It’s really sinister and freaky and I am really disturbed by what happened.

‘It has made me not want to use Dominos delivery any more.’

Nina Arnott, spokesperson for Domino’s Pizza Group said: ‘We are very sorry to hear about Imogen’s experience, which was wholly unacceptable.

‘Following an investigation, the driver has been dismissed with immediate effect.

‘We are in touch with Imogen to help put this right.’

And honestly? It's fucks like this that are the reason why some recommend getting a dummy number for ordering out or to at least request in the online instruction box that a female delivery driver bring your order.

This is in the UK she can get in touch with the police about someone abusing the phone system and they can be arrested and can be blacklisted for mobile phone companies.

I've met the sad sacks like this idiot, they have no concept of the word no and the phrase "fuck off you creepy bastard!"

A less sinister version of this happened to my roommate on Christmas Eve this past December.

We ordered pizza from, if I recall correctly, Pizza Hut (he paid, he picked; normally I'm a Dominos guy) in the mid-afternoon. Since it was Christmas Eve we both agreed that a generous tip was appropriate because the guy was working instead of with family, it was sucky weather, and general Christmas spirit. So my roommate left a tip of $14-ish on a $25 order. Later he got an unsolicited text message from the delivery driver thanking him for his generosity and explaining a couple things:

1) No one else tipped him more than $3 that night and that he only got a couple tips for the couple dozen pizzas he'd delivered all day. He initially assumed the tip was $4 which was still nice to him. Then he saw it was $14. He says he almost started to cry.

2) Thanks to that tip, exclusively, he was able to get to Walmart after his shift and before they closed to buy his son the only Christmas gift he was able to afford: a fishing pole.

So, ya know, not nearly as creepy or sinister here as this poor lady. But... I was still bothered by it. No matter the intention, the delivery driver should NOT have kept or located my roommate's phone number or texted him (except to announce his arrival with hot cheese covered bread). If it hadn't been Christmas, and had been me instead of my roommate, I'd have called the store and spoken to the manager.

kitai306 I think the thank you text was very polite and a way of showing appreciation. Would a card brought to address been any more comfortable? With everyone complaining these days about kids not writing thank you letters, I think a one time note of appreciation wasn't that bad.

I can see what you mean, kitai, but that was still an awfully sweet thing to do. I know I'd feel pretty good if I found out my tip was the reason a child could have a gift on Christmas.