English Is Hard: I'm Not Sure What's Going On...
Public Phone Booth Gets Turned Into a Fish Tank

Religious police. Gender barriers. Overpriced coffee. That unusual mix of forces has come together to create quite the kerfuffle in Saudi Arabia’s capital city Riyadh. A Starbucks there denied women entry to the store this week after religious police in the city reportedly noticed that the “gender barrier” inside the coffee shop had been compromised. In Saudi Arabia, where women are infamously banned from driving, wood partitions known as gender barriers are reportedly present in every restaurant and even in food courts to keep men and women separate. After religious police noticed the barrier in one Starbucks had been knocked down, store management posted a sign on the entrance that barred women from entering. Photos of the sign surfaced on Twitter. “PLEASE NO ENTRY FOR LADIES ONLY,” the all-caps sign read. “SEND YOUR DRIVER TO ORDER THANK YOU.” 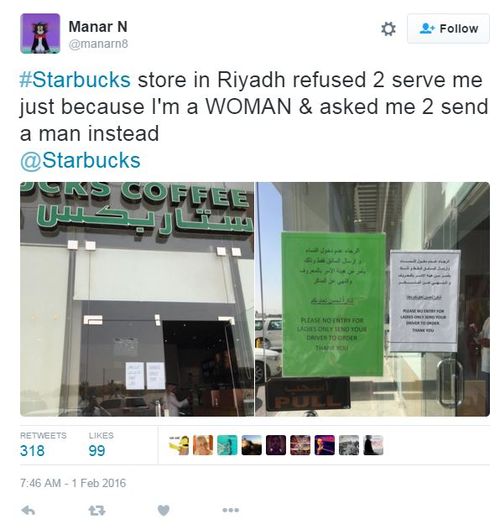 One woman who was denied entry posted a photo of the signs on Twitter, along with a message saying, “#Starbucks store in Riyadh refused 2 serve me just because I’m a WOMAN & asked me 2 send a man instead.” Starbucks didn’t respond to the woman’s tweet but eventually a company spokesperson issued a statement to Cosmopolitan saying that the coffee giant observes local customs, and blaming the confusion on renovations.

And this is why I'm never going to any place like Saudi Arabia. This isn't the 1600's, this is the 21st. century, and if there are places that don't get that, I won't be going there. No one's going to tell me I can't get coffee somewhere just because I have breasts and a uterus. :)

sorry but this is Saudi Arabia we're taking about. not exactly known for being gender equality.

I can see the point of the sign. Saudi Arabia has a culture of male dominance. lets say a white American or European tourist(who is the only person i can see taking offense to that sign)wanted to go in.

She will be the only female in a store full of males (who's view on woman is based on their CULTURE). She might get catcalled, harassed or worse.