Funny Fakes: iPhone Sneakers
Broccoli Farm Prank Does Not Go Over Well For This Little Boy 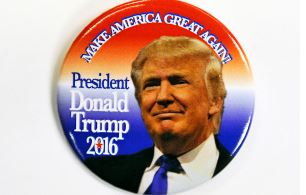 If the election for the White House were based on the sale of campaign merchandise, Donald Trump would win by more than a hair — it’d be a huuuuge landslide.

One of the biggest independent sellers of campaign merchandise in the country, Berkowitz said Trump has even surpassed the incredible selling power of President Obama.

“Obama was beyond belief,” Berkowitz said of America’s first black president, whose campaign buttons sold like hotcakes in 2008. 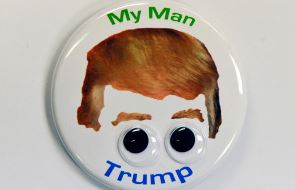 “Trump is beyond beyond belief,” the button-maker said.

That’s because people who both love and hate The Donald buy his pins.

Berkowitz has sold more than 18,000 Trump buttons, more than double all the other candidates combined.

The hottest-selling button of 2016: A picture of Trump’s disheveled mane with the heading “We Shall Overcomb!” “The Democratic clubs make money by reselling the Trump Hair button,” Berkowitz said. “There is nothing that competes with ‘The Hair’!”

If Clinton becomes the Democratic nominee, Berkowitz is ready to cash in on history in the making.

To commemorate the possibility, the “Bill Clinton for First Lady!” button shows someone handing the 42nd president a red dress.