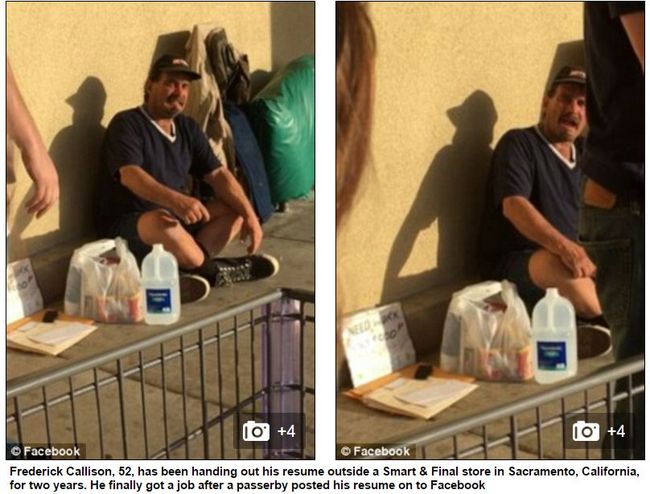 A homeless man in California landed a job after handing out his resume to passersby instead of begging for money.

Frederick Callison, 52, has been sitting outside a Smart & Final store in Sacramento for two years passing out his resume while holding sign that read 'need work and food'.

On February 24, shopper Michael Marteen saw Callison outside the store and approached him, finding it refreshing that the man was trying to find work despite his difficult circumstances.

The father-of-two said Callison had his food handler's certificate, Social Security card and ID with him to show he was serious about trying to find work. 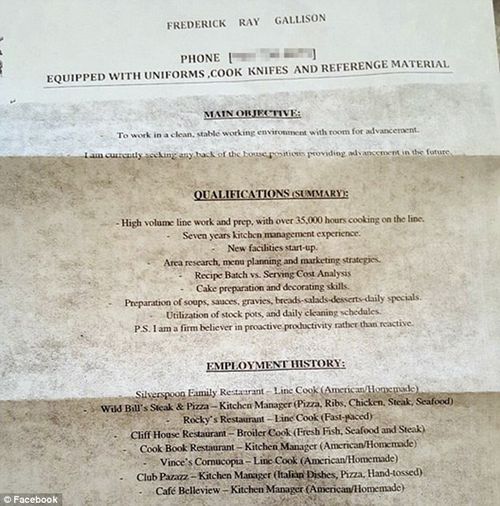 'When I asked if I could see his resume, he hopped right up to hand one to me and then started telling me all about his experience as if it were an interview,' Marteen, 25, told TODAY.com.

'I've been in situations where I had nothing and had to bust my butt to get work, and there he was doing that, so I have a lot of respect for him,' he added.

Marteen took photos of Callison and his resume and uploaded them to his Facebook page, where the pictures quickly went viral.

Callison, a former line cook, moved from Washington to Sacramento two years ago in hopes of becoming a cook for the Salvation Army.

When it didn't work out, he ended up living on the streets. Smart & Final allows him to stay on their property because he helps push carts at no charge.

After Marteen posted the photos, someone reached out and offered Callison a job at a downtown restaurant called Pizza Rocks.

'He was ecstatic about landing a job and very grateful for the opportunity,' Marteen said. 'He was up the night before studying the menu for hours.'

The restaurant gave him clothes to wear and a friend gave Callison a place to live until he can get back on his feet. 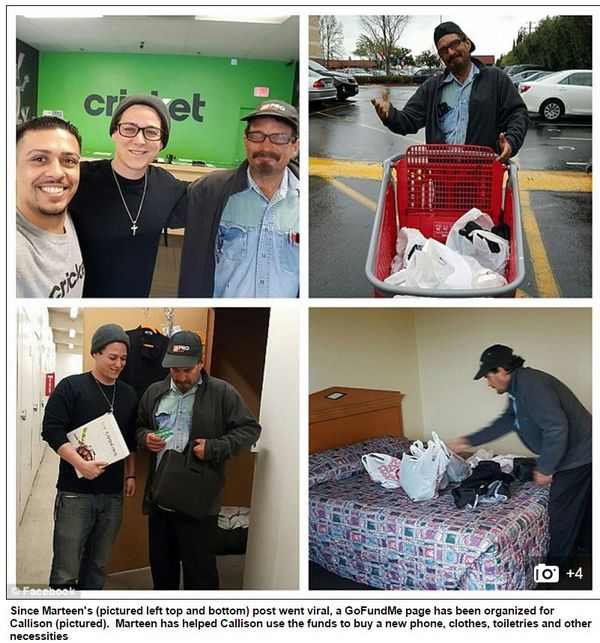 'It's easy to look at someone and not see anything but a homeless man, but after talking to him I realized he's so much more than that,' Marteen said. 'He's a well spoken, cool and friendly guy who knows what he wants and is going after it.'

A GoFundMe was set up for Callison, and the page has raised more than $2,600 for him.

Marteen has helped Callison use the funds to buy a new phone, clothes, toiletries and other necessities.

Marteen wrote in a Facebook update: 'You all should know, today Fred got treated like a King. Thanks to all of you!

'Fred got a brand new phone with ‪#‎CricketWireless‬. His last phone charger for his old phone was stolen last night while he was sleeping.

'He also has a new bus/regional transit pass. And a storage unit. But to end the day, with how bad the weather is, Fred will be in a Hotel the next 2 nights along with a full Pizza to himself.

'He was beyond happy, thankful and greatful. Fred is getting there. He's adjusting to all this and for once he's not invisible. Because of all of you! Let's hit that Goal so we can get him a trailer to call home.'