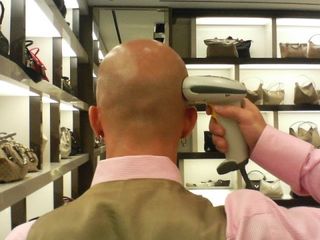 I mostly overheard this while packing my groceries last time. I’m past the registers, in a somewhat open area before the exit leading back to the mall-section of the store and this is the place where most people pack their groceries, before leaving and returning the carts to the entrance.

So, I get there and begin packing, hearing some woman saying “Now, I am not complaining about you…” in my near vicinity. I casually throw a glance, being a little curious, and there’s an employee next to me and a woman customer beyond her.

A few seconds of listening, I realize the woman is complaining that a large metal surface table is packed with some newspapers/flyers and a medium-sized box used for recycling small items like batteries, and how oh-so-inconvenient they are and taking up aaaaall the space and leaving no room for her to put her basket on it to pack groceries.

In reality, the box and newspaper take up maybe 10% of the surface. Adequate room for more than 3 or 4 baskets to be placed on it for bagging your stuff. But the woman kept insisting to the employee that there ‘was no room’ and ‘the other location of (this store) has this place completely free’ and stuff like that. Mountain out of a molehill and all.

Likely to appease the woman who was totally-not-complaining, the employee took the little recycling box and newspaper and put them on the floor NEXT to the table. Consequently, narrowing the passage where multiple carts and trolleys would be rolling through, as well as strollers and humans. And being more in the way than they had been on the table.

Hope you’re happy, lady. Making it difficult for everyone else to move towards the exit, because something minutely inconvenienced your ‘space’ on a table.