Drive Thru Dissidents: Cranky Old Codger Thinks He'll Get It Faster This Way
Customer Reject of the Day: M&M's Gum A Bristol company is planning to create an official “period policy” designed to allow women to take time off without being stigmatised in the hope it will make its workplace more efficient and creative.

Bex Baxter, the director of Coexist, said the move an attempt to synchronise work with the body’s natural cycles.

“I have managed many female members of staff over the years and I have seen women at work who are bent over double because of the pain caused by their periods. Despite this, they feel they cannot go home because they do not class themselves as unwell.

“And this is unfair. At Coexist we are very understanding. If someone is in pain – no matter what kind – they are encouraged to go home. But, for us, we wanted a policy in place which recognises and allows women to take time for their body’s natural cycle without putting this under the label of illness.”

Coexist, where 24 of the 31 staff are women, is no ordinary company. It manages Hamilton House in the city’s bohemian Stokes Croft quarter, running the space for artists, activists and community organisations. There is a restaurant called The Canteen, and Banksy’s Mild Mild West mural showing a teddy bear throwing a petrol bomb at riot police greets visitors.

Baxter said: “There is a misconception that taking time off makes a business unproductive – actually it is about synchronising work with the natural cycles of the body.

“For women, one of these is their menstrual cycles. Naturally, when women are having their periods they are in a winter state, when they need to regroup, keep warm and nourish their bodies. 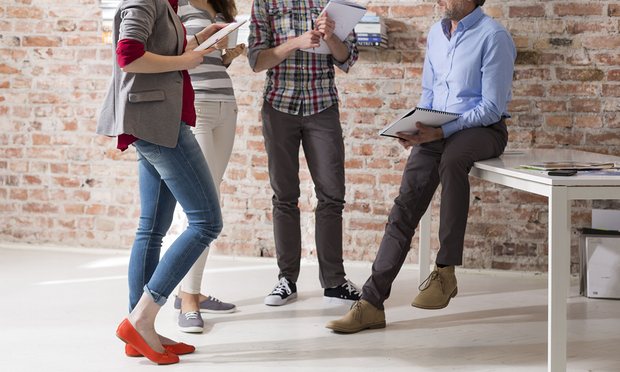 The spring section of the cycle immediately after a period is a time when women are actually three times as productive as usual.

“My team here have always been very generous – I’ve been able to take time off when I’ve needed it, but always put it back in again. But until now there haven’t been any formal guidelines.

“For too long there’s been a taboo surrounding periods – I have women staff telling me they’re ashamed to admit they’re in pain. I want us to break down that shame and replace the negativity with positivity. Both men and women have been open to the ideas, especially from the younger generation.

“I was talking to someone the other day and they said if it were men who had periods then this policy would have been brought in sooner.

“It’s not just about taking time off if you feel unwell but about empowering people to be their optimum selves. If you work with your natural rhythms, your creativity and intelligence is more fulfilled. And that’s got to be good for business.”

Baxter and her team plan to formulate the policy as part of a seminar at Hamilton House on 15 March called Pioneering Period Policy: Valuing Natural Cycles in the Workplace.

Pope, who describes herself as a women’s leadership coach and educator in the “field of menstruality”, said: “In the past any proposal to allow women to, for example, have time off at menstruation has been derided by men and women alike. In this context menstruation is seen as a liability or a problem. Or as women getting special treatment.

“The purpose of this policy initiative is to create a positive approach to menstruation and the menstrual cycle that empowers women and men and supports the effectiveness and wellbeing of the organisation. To restore the menstrual cycle as the asset it is.”

She says her seminar will “present a radically new model of the menstrual cycle as an asset for your entire organisation”.

Quite frankly if I call in sick, it's most often because period cramps are causing stomach issues. Some women get violently ill or in extreme pain. Being understanding on those times it does happen, would make me have more loyalty to the company and put more or myself into the job. When you are in a position where the company cares nothing for you, then you start caring nothing for the company.

I agree women should get time off if the menstruation is so bad they can't concentrate, are emotional, and wish the pain would kill them already. You can't do your job well if you're in mind-blowing pain!

Fortunately for me the Pill has eliminated most of my misery, but before I went on it there were days when just moving the heating pad off my abdomen so I could get a drink or go to the bathroom or something felt like an effort worthy of climbing, if not Mt. Everest, then at least Mt. Hood. I explained it to a guy as "imagine being kicked in the balls... repeatedly... for three days straight... while bleeding" and had the satisfaction of seeing someone's face actually change colour. Sounds like a step in the right direction to me!

1) I see this policy backfiring badly. Too many unscrupulous women will take advantage of it, in larger companies were it adopted more widely, without it being truly verifiable (unless HR/management does something intrusive like tracking it). Last minute out of town visitors you want to go shopping with? Period! Late night of drinking? Period! Ad nauseum...

2) I hope as they adopt this policy that they offer the men in the company an equivalent amount of comp time. Having grown up with two sisters and no brothers I can reasonably understand why women may NEED time off during that monthly event. Meanwhile, as a direct result of the same experience of two sisters, I get extremely frustrated when women get uniquely preferential treatment. Just because it has a logical explanation does not mean that the emotional impact is negated. If they don't offer the men something comparable there will be hard feelings in due time. Especially since that means the work load will now be permanently increased (that many women will mean that virtually every week several are off for this and thus the work will be distributed around to the non-menstrating employees).