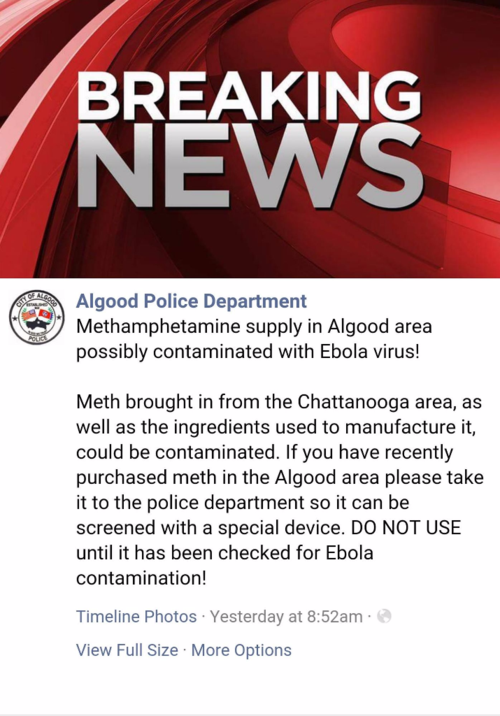 Algood Police Department Yesterday at 7:52am · **UPDATE ** THIS POST WAS OBVIOUSLY NOT TRUE

This post was a calculated operation to draw out meth users. For the people who were disgusted, disappointed, or thought this operation was elementary, we received five calls from meth users who were concerned about being infected because of meth use. On top of that, the numerous persons who were completely obvious with their comments here on Facebook.

Bottom line, never try to predict what a meth user is going to do, they do not think like a normal person. For the meth users that feel like their meth addiction is a medical condition (which I received numerous private messages), seek help before law enforcement catches up to you.

We will not change the way we do business because it offends you. Here at the Algood Police Department we will continue to use every tool at our disposal to fight the methamphetamine problem, including social media. Already this year we have successfully removed well over one half pound of meth of the streets.

Kent County, Muskegon, and Grand Rapids police should do something similar with heroin up here. Maybe it will cut down a little on the ODs that fire and EMS get called to.

So... question... can they prosecute anyone who mistakes this for an actual warning and brings it in? Or... does it count fraud? I mean, they're trusted to issue honest warnings and notices. It's inherently, and intentionally, duplicitous and underhanded. And since the Chief of Police himself acknowledges that addicts "do not think like a normal person" they're taking advantage of a compromised state of mind to draw them in. Take and dispose of the drugs, but I wonder if these methods would hold up if drug charges get brought against the individuals.

I think there's some leeway as far as Agent Provocateurs are concerned, otherwise you'd never get convictions from undercover cop operations, nor from espionage operations.

I actually thought about that Eddy, but I keep coming back to the apparently inherently compromised state of mind they are purporting. Undercover operations, such as your basic street prostitution stings, are predicated on the idea that an otherwise sane, clear thinking individual is making a deliberate and reasoned decision to break the law. Same with your more crucial undercovers such as slipping a cop in to a gang of drug dealers. But in this scenario the criminals are considered already past the point of clear thought.