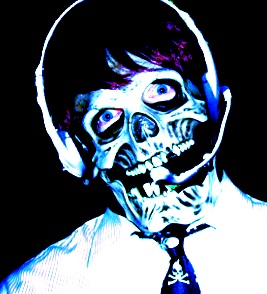 From a Call Center Slave, posted to RHU December 2009:

I know I'm not in retail but I have to deal with the same stupid ass customers and coworkers that retail workers do. I work for a computer company. I had this one bitch call in from New York.

Ooooohhhh like I'm paid enough to care. If you can't even say "hello", you're not giving me any incentive to help you.

Dumb bitch goes on a 4 minute rant about how "no one speaks english".

I get fucking pissed off at racist hags like her.

I interrupt her saying "everyone speaks English that works here" and that if she can't speak nicely, I will hang up.

At this point I'm itching for her to cross the line so I can either hang up or transfer her in to call router hell.

Then says her 6 year old spilled juice all over her notebook and she wants to buy an accidental damage warranty.

Fucking entitled bitch thinks she can buy a warranty AFTER her spawn has wrecked her notebook.

I tell her no.

She calls me a "stupid cunt" and says she's "writing Bill Gates" about me.

I make a note in her file saying she caused damage, and not to sell the bitch a warranty in the future.

Customers don't realize that if they treat staff like the humans we are, we may go the extra mile for them. If she was nice and polite I would have pretended not to hear that her notebook was damaged by her spawn and sold her the warranty.

If they just took the time to say "hello" and speak in a human, calm voice and not spew ignorant, racist crap you'll get off the phone with tech support much faster and happier.

To all the rude people phoning in, all I have to say is FUCK YOU!

Why is this such a difficult concept for the unwashed masses to understand?!

So true Kitai. I still remember my most rewarding call. It wasn't even something really hard. It just took a while to go through all my usual steps to find it. The guy was patient, and afterwards he gave the phone to his son who I'm guessing was all of 5 or 6 and said "Thank you so much internet lady!".

I loved the ones who would curse. Just an excuse to ditch them.

I really don't know how people think it's acceptable to be so awful to tech support, retail slaves, the like. You get a hell of a lot farther if you're nice!

It's so true. And then there were the people who called in and demanded a supervisor immediately. And wouldn't tell you squat about why. At least where I worked, I had to have their account info up, and to have a reason before I could get a supervisor. Yes you are upset, but how hard is it to say my phone number is this, my account number is this, and this is the issue.

Takes a whole minute, then you can have a supervisor. More than half the time they would take what we called "floor support". Really just other CSR's like us who were entrusted to see why a call was taking so long, checking for trouble, getting supervisors, etc.

Sorry for rambling, that job had me well on my way to a mental break down. And it just helps me to vent.

Vent away. I salute you for surviving that hell as long as you did.

I've told this story before, I'm sure, but it still fits here. (I may have told it on this post originally. :P )

Two calls, on different days. Each had worked on a powerpoint (spit) presentation for a full day, and closed out of the program and told it to not save.

Bitch starts call with "(explanation of above) and you will fix it. Now."
"Sorry, you told it not to save the file, so it deleted it. There isn't anything to fix, the program did what you told it to." (shrieking and threats, to the point where I hung up on her. She called back and got one of my cow-orkers, shrieked at him and he eventually transferred her to the on-call person... and shrieked and cussed at HIM to the point where he told her (my co-worker and I were listening in) that he was going to report her to HR for being abusive, and hung up on her.)

One of the best callers I'd ever had: Starts the call with "Hi. I'm an idiot. I've done something incredibly stupid, and I'm hoping you can save me." (I spent three hours with him going through temp files, and eventually found his presentation missing about five slides.)

Tech support definitely, and customer service almost certainly, WANT to help you. Most of us started off bright eyed and bushy tailed, wanting to save the world from malware and temp files... After a while of abuse, we just want you off our phone, and the quickest way to do that is to fix your problem. Work with us and we will fix your stuff as quickly as we can. Treat us like something other than retarded robots, and we will bend over backward to do what we can to make it better.

Give us shit from the start? You get the bare minimum we can get away with, and any possible perks will never rear their heads.