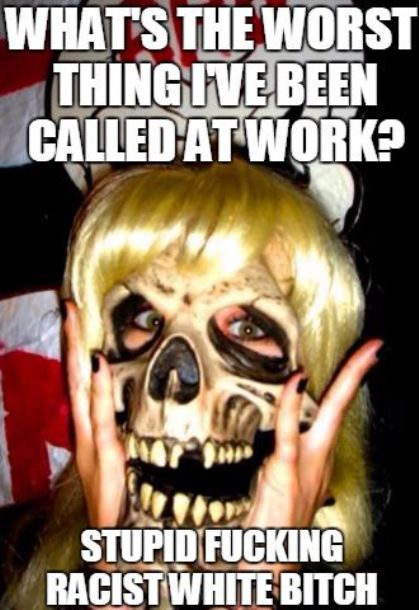 The worst that's ever happened to me was a coworker. And let's just say that a certain Grocery Store Company can go straight to hell for how they attempted to "deal" with the situation.

I was in training to be a supervisor at the time, kept coming across the same cart boy sitting on his ass in the cafe not doing anything. I knew I didn't currently have the authority to tell him to do his damned job, so told a manager.

She told him get to work, an hour later guess where he was again?

Told her again, she told him to go home if he didn't want to work. I was backing up the register lines an hour later (dude sat in our break room for an hour stewing about this I guess) he starts walking past my register, then stops at the end.

I turn to face him to see what he wants and he screams, "STUPID FUCKING RACIST WHITE BITCH" and chucks, full force from a foot and a half away, a full large fountain cup of soda and ice at my face.

It busted my lip wide fucking open. Security didn't even stop him at the door.

I won't go into what happened from that point forward because it still makes me boil with rage, but a month later he still worked for the company (in the same store) and I did not.

They refused to protect me. I should have taken their asses to court but I decided to just put it all behind me. I didn't feel like dragging out my suffering any longer than necessary.

So there we go. Coworkers are the real douche bags. Customers I can laugh off.

Screw having security stop him, I would've tackled that asshole to the ground and beat his face in.

I would've reported him immediately! That's assault and battery with a dangerous weapon right there!

Yea, that's definitely when you call the police.

He was brilliant. By using the R word, he ensued that he was safe and you were fucked.