Sale Fails: You can Get Fire For A Discount At This Place!
Toxic Coworkers: Several In One Boad 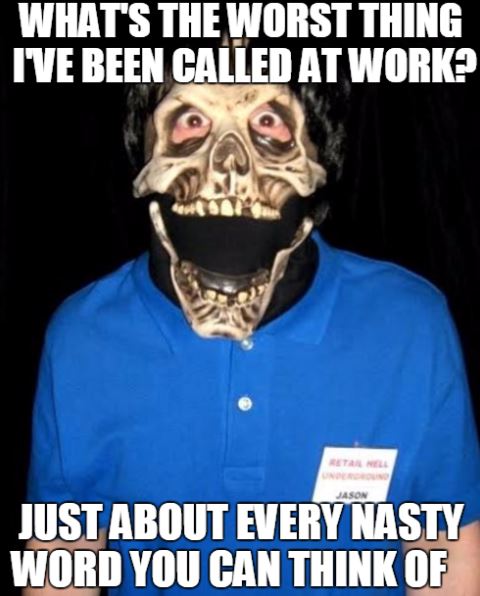 Closing out RHU's Worst Thing You've Been Called at Work theme is a tale from Misty Meanor and some sound advice about verbally abusive custys who think it's no big deal to call workers foul names:

A long time ago, when I was writing under my old pseudonym, I told a woman from a nearby restaurant that she had to wait in line to pick up her photographs, and she seemed unhappy, but I didn't think much of it.  After finishing with the couple I was helping and welcoming a woman with two young children to my register, the other woman barged in and told the mother she'd just be a minute, then she proceeded to berate me harshly.  The mother tried to interrupt, and the woman told her to shut up, then the woman began to call me every obscenity in the book at least a couple times, even using the n-word at least once! She also added that she was, 'more American than my ass was.' (She was Hispanic, mind you.)
By the time supervisors arrived, she was long gone.  I gently reassured the children she wouldn't be coming back.  That was when I was a lot younger.  Now that I'm a lot older, though, I won't be taking the crap from anyone! If anyone tries going on a rant like that again, or even drops the n-word (or any other slur) on me, I'm ejecting them!