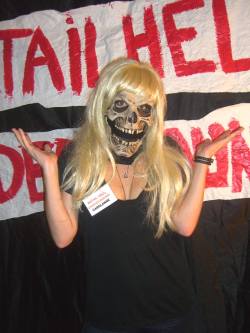 Former McHell Manager here, to tell a tale of a creepy old guy I caught the other day.

I was working my normal closing shift at the King when a older customer came in and ordered coffee. I've seen him before and he never acted out of the ordinary, so it was a normal transaction. He asked me about Pokemon Go after he got his coffee and sat down, which I know nothing about and said so.
After a few minutes a group of young adults came in, and he asked them about it. Basic stuff like "what makes a place a gym" and innocent stuff like that. My co-worker thought it was weird that he was asking them the questions, but I thought nothing of it. Sure he was older, but he had a tablet, so I assumed he just wanted to maybe try it out later and wasn't sure what the hype was about.
So I started up my cleaning tasks in the dining room and as I got to the area near him, I heard some weird noises. Sounds like moaning, coming from the guy's booth. I stood there for a brief second, thinking to myself "no, he wouldn't..." and continued on, making sure to listen. Sure enough, after a minute, it was very clear that he was watching porn on his tablet in the middle of my family friendly fast food restaurant.
Now, I am simply a Team Leader about to go into training for management, so technically I don't have any real authority to kick people out, but fuck that shit! I peered over the highish wall of his booth, saw for the fact that he was watching porn, with no headphones, under the table and said "Sir, you CANNOT be watching that in here! You need to leave RIGHT now!"
Thankfully he did.
I just cannot believe it! Thankfully no children were around, because I would have called the police immediately.

Seriously, old dude, what the fuck? I hope you banned him.

I would've done the same myself. If he didn't, I'd report it to my supervisor or call police!

I would say it is a crime to watch adult material on a device that can be viewed by a minor in any place that can be accessed by the public, Storm. That can be corrupting a minor, lewd behaviour in public and a few other bookable offences. It might have been under the table but the sounds were pretty obvious from the description. Also those tables aren't low so there's a big gap right there.

Who gives a damn if his was pulling his pud or not, I don't want to be subjected to his kinks. His rights end where mine start and if he's encroaching on my person with his sounds then he's going too bloody far.

Yeah it's usually either obscenity or adult material in public. In some states that can get you put on a list as a registered sex offender.