Minnie Mouse Gets Put to Work In Russia
Food Truck Signage: Our Cows Are Vegan 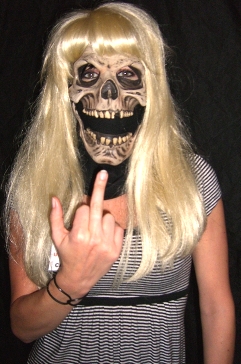 Worked at Pita Pit in college for a day. About halfway through my first shift, the manager asks if I have a car.

He said I had to go get it and deliver for him til close because the driver he was into called out because she was too hungover (She said this on speaker in front of like half of the people waiting in line and everyone else who was working).

He also told me I had to pay for my own gas and give all tips to him since I was still making 8.20 an hour instead of the 4.50 the drivers made plus tips. He handed me seven bags and a list of mapquest directions to them, three of the deliveries 10+ miles away (Furthest being 17 miles in the middle of fucking nowhere Pennsylvania that just screamed DELIVERANCE RAPE SCENE).

Boss called me not even 15 minutes later screaming at me for not making all of the deliveries yet and said that once I came back and gave him his tips, I was fired.

With five deliveries left to go, I said "Fuck it" and went to my friends place with the rest of the food.

Stealing food, huh? Really mature. Yeah, I get it, the manager was a complete dick, but you stole food from people who had nothing to do with that guy. You could have told him immediately, upon saying you needed to pay for your own gas, "You don't pay me enough to even remotely cover what I'll lose today on gas" and leave.

Under the circumstances, he was probably not going to get paid either, and the people hadn't yet paid for their food so they weren't losing anything but some time, and the manager deserved the grief he was going to get for it.

That asshole of a manager got what he deserved, and guessing from their attitude, lost all those customers because they probably told the customers to go fuck themselves. I've seen managers like this, they get fired pretty soon, at least, that was my experience.

I'm torn about this but I absolutely see the poor sod's view. You know when he got back he was going to be royally shafted sans lube. He didn't have a single thing to lose and there was no way that scum bag manager was going to call the police out.

I'm not sure I could have done it but I applaud you Puck for doing it.

Lightning, I hope you live an absolutely perfect life, never make any mistakes and never, ever take anything as a perk ever. This is the only way you can be any where near as judgemental as you're being.

He could have easily dropped by the place, left the not-yet-delivered food at the counter, flipped the manager off and left. Telling the manager off, too, optionally.

Oh, I see, so you wanted him to do something that would basically sink to the manager's level. Good job.

In all honesty I would have done the same thing. Thanks for the food that I paid for with my gas and time. I hope it tasted great.