Rude Custys: People Who Throw Money or Credits Cards Down 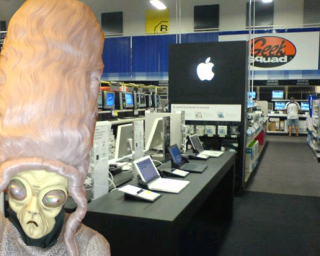 I have been with a well known electronic store for close to 2 years now. I have switched districts since I moved about 6 months into my first year with them.

In my old district I never really had this issue. In this new district I put out my hand to accept the person's money and they put it on the counter and wait for me to pick it up.

Now this happens with all different kinds of people and no one race or religion is the sole culprit. I find it to be rude, but then I get the customers who also throw their credit cards down expecting me to take it like that. (we have the machines by the customers for them to swipe, but that doesn't stop them from throwing the card at us.)

I find it sad that I become pretty happy when someone hands me their money since it's such a rare occurrence. Anyone deal with this?

What do you think RHU? Do you find it rude when a custy does this? Or would you prefer not to touch their hand also?

When I worked at The Big Fancy many moons ago, I also found it rude when Custy's would drop coins, cash, or credit cards on the counter when I would customarily put on my hand to receive payment. Do you think think this happening more often and a change of the times, having something to do maybe with fears of catching a cold or something?

Interestingly, the Jewish Market in my neighborhood that I have mentioned on RHU, there is lots of money and cards being thrown on the counter both by the cashiers and the custys. They appear to not want to have any contact with each other as well.

Honestly, I don't find it rude most of the time. Mostly when customers do it to me, they put it on the register shelf so I can easily just slide it into my hands.

But of course, there are the rude fuckers, like the bitch that literally tossed her crumpled cash at me like they were used tissues and I was a trash can.

*Throwing* the card/cash is rude beyond measure. There is no excuse for it.

However, *setting* it down on the counter versus handing it to you or accepting it from your hand is understandable. Plenty of reasons they might prefer this. Most easily surmised is they don't want to risk touching you for any number of reasons. Personal space issues, cultural issues, illness, paranoia.

So to the OP, get irritated that they throw it at you. But I'm afraid you need to let it go when they set it down or want you to set it on the counter.

I actually made a post about this problem with one bloke who went totally incandescent because I dared to ask him, very politely and in a friendly way, to put the change into my hand. He went on about how disabled he was and oddly it's been 18 months since he did that, when he needed a crutch to help him walk. Now? Not even a limp. Very disabled.

I have never thrown money or my card. However I do both lay the money on the counter or hand it to the person depending on the speed, service, and layout. For some of the diners I go to, there isn't always a person at the register, so I place my money with my check on the counter till someone shows up. Other times at stores I'll have figured out the price and have my cash ready before the cashier is done ringing me up, so I'll have the money laying out while loading my purchases back in my cart. Other times, especially if I am the one causing the wait, I will hand the money (and check if at a diner) directly to the cashier. I only hand over my card if there is no card reader for me, and this I always physically give the cashier. And I have no problem picking up cash & change from the counter or from someone's hand, which ever is easiest, just never throw it.

I have not had any money or cards thrown at me yet. Money is usually placed on the counter (since I tend to scan the game, then turn and get the disc, so it's just simpler to have the money on the counter) and I place any change back onto it. Cards are usually held in the customer's hand - only time I touch their card is if I am the one to remove it from the card reader when it prompts me to. Other times, they take their cards themselves.

And as a customer, I tend to put the money down. I dunno, I guess I've had too many experiences where trying to put money into the other's hand resulted in some being dropped from either side.

Throwing things contemptuously is always rude. But these days a lot of people are leery of being touched, so what I usually do as a customer is count out my money onto the counter while saying what it is, then sliding it to the clerk's edge so it's easy to scoop up. If I have to hand my card to the clerk -- rarely -- I hold it by the edge closest to me and extend it so s/he can take it by the edge closest to them.

I don't mind if they put cash on the counter. Coins though? I can't imagine how a person could be so inconsiderate.

Never had a problem with a credit card. My customers have thankfully been intelligent enough to see the card machine facing them.

When it comes to paying with debit, I simply say debit please and run my card. If I pay with cash I usually hold a bill out by one end so they can take it by the other. If the cashier isn't ready I'll set it on the counter. For change I usually place it into an outstretched palm.

I have stacked coins on a counter, usually when a cashier isn't paying attention, I have a wait.

I've accidentally thrown my card at a cashier... Pulling it out of a wallet with an undersized card slot (Seriously, they've been the same size for 50+ years, how do you make the thing too small? It's like trying to sell me an L shaped condom. You know what I have to work with here! I've got three different wallets laying around with the same problem, this is just the least horrible, after I gave it Joker scars...) and fumbled it, went all Globetrotters for a moment then ended up slapping it in such a way that it flang at the cashier. She caught it and laughed, and handed it back.

I hand over the money, unless I'm terribly ill. In that case, I'll gently explain why I'm setting it down, and try to minimize contact as much as possible. Don't want to get the poor retail drone sick!