Either My Cereal Expired In The Early 90's, Or It's Targeted Toward The Elderly
Game Store Hell: You Know the Owner? Well That Changes Everything! 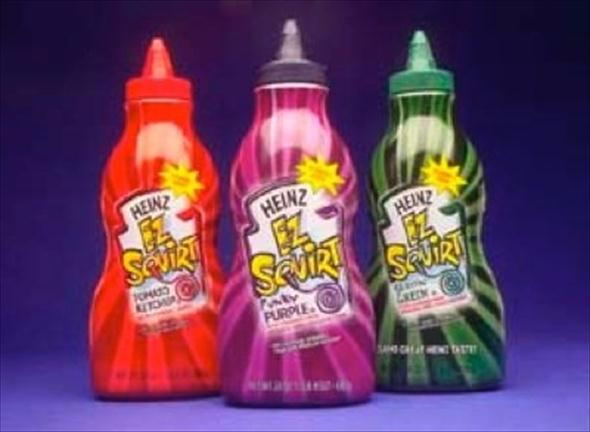 Heinz, is an American food processing company, headquartered in Pittsburgh, founded by Henry Heinz in 1888. The company took a massive risk in the new millennium by launching coloured ketchups to appeal to the younger crowd. They had bizarre colours like passion pink, awesome orange, totally teal, electric blue and funky purple, to name the few. Heinz EZ Squirts first launched the blasting green and created to support the Shrek movie!

As expected, the kids ran to get their own. In fact, each new colour gave Heinz and increased leverage in the market. More than 25 million bottles were sold. However, instead of becoming a staple on the dinner table, it was despised by parents who found it resembling extra-terrestrial tomato sauce and unhealthy due to artificial colouring.

Timing is everything. Green was a safer bet to begin with, as tomatoes could be green. But the next colour came out after a huge gap of 2 years! As expected, it bid goodbye pretty soon afterward.

I think a relaunch using natural coloring from carrots, beets, etc might do well. I regret never getting a chance to try that stuff before it disappeared.

I loved this stuff, purple was my favorite; I bought that stuff every chance I got. :D