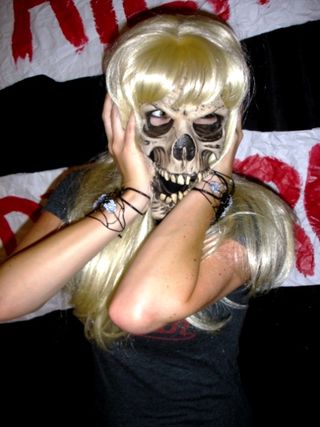 Shortly after I started working in the rat infested swamp, it was announced we would be moving to a new location about a mile up the road. There was much rejoicing. It was premature, though overall, it was an improvement. At least the new building had no mounds of rat feces in the dark corners.

The new shopping center was two level, and our building was brand new, on the upper level. There was nothing else up there at the time, though the local police put a very small substation in the corner of our building shortly after we moved in, and a few months later a gym moved in across the parking lot.

Turns out, new buildings aren't really that much better than really old buildings. The first problem we discovered was that a good gust of wind would blow the receiving door open. Often at 3:00 AM.

This does not make the cops next door happy, because it set the - very loud - alarm off, and hey, on duty or not, they need their beauty sleep, too. Got a call at, as noted, 3:00 AM one morning because of this. They had gone in, climbed over the wall of the office, found the emergency phone list, and started at the top (which was the owner of the company). I was, If I recall correctly, #3.

When I arrived, they had a police car parked against the door to hold it closed, because it was a windy night. We installed brackets for a 2x4, like the bar on the door of a medieval castle, because the management company completely ignored the complaints. Guess it was fortunate we were a hardware store.

Then there was the location of the receiving door itself. It was on the *front* of the building, in the corner away from the main door, but mostly hidden by bushes and the enclosure for the dumpster. There was a curving sidewalk, maybe 30 feet long, from the parking lot, slightly uphill. Unloading trucks was a royal pain in the ass, when we had to hand walk stuff that far, because the sidewalk was a little too uneven for the pallet jack.

But the truck driver from our national franchise (in other words, he delivered about 80% of our inventory every week) was amazing. Now, mind you, this guy was the sort who found weightlifting to be intellectually challenging, but he could drive that truck like a wizard. He managed, every week, to back his 18 wheeler up that *curving* sidewalk, 30+ feet, with less than 12 inches on each side, with nary a scratch on his truck. Then, he'd set up the roller ramp out the back of the truck, so that the boxes and totes would slide down into receiving, right where we wanted them. And this guy was a *stud*. I swear he could palm a 60 pound tote with one hand, and it took two of us to keep up with him. Favorite driver ever.

The real adventure, though, was the roof. The building was flat topped, with a roof made of tarp paper covered in some sort of gravel, with the drain in the corner by receiving. Since the roof was (a lot) wider than the tarp paper, it was covered in strips that overlapped. Done right, so that the water runs from the layer on top towards the layer on the bottom, it works fine. Problem was, when this building was built, the roofers (being California contractors, and therefore, incompetent and corrupt), layered the tarp paper the wrong way for the drainage. So when it rained, the water ran from the lower layer to the upper, and ran *under* the top layer, into the ceiling of the building.

It was a big building, so it was a lot of water, literally pouring through the ceiling. Must have been ten gallons a minute or more. And directly under it was the 3,000 volt electrical panel for the entire building. The first time it rained, we noticed it quickly enough to get tarps in place to channel the water out the door, thankfully. Otherwise, it would probably have literally exploded, and burned the building to the ground. In the rain.

Note, this was the same winter rainy season that taught us the rat infested swamp building had a leaky floor. And it was an El Niño year, so it was raining a *lot*. Every few days, torrential downpours.

So this brings us to the management company, who were, demonstrably, worse than the outfit at the old location. They just didn't care. Half the time, they wouldn't even answer the phone. (Our store manager at the time was a little too passive, which didn't help any either.) So it would rain, and we'd report the leak, and describe both the volume of water coming through the ceiling and the extreme danger, and as soon as it stopped raining, they'd send out a maintenance guy. Not a roofer, a maintenance guy. Who would smear a little roofing tar over the most obviously washed out seams, which did absolutely nothing. Next day, it would rain again, and water would be pouring through the ceiling again. We didn't even bother to take the tarps down. 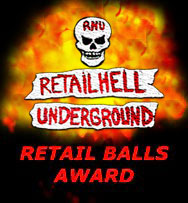 But in the end, we came to an understanding. You see, we were on the upper level of the shopping center. The two levels were connected by a stairway. Nobody ever used it, because it was easier to just drive to the upper level and park there, but there was a stairway. And we had a sign on the back of the building that was visible *only* from the stairway.

And one day, the management company noticed that we had some bulbs burned out in that sign. So they called up, and told me had 24 hours to get the sign fixed or they'd call an electrician and add it to the rent. (This would be, at most, a couple hundred dollars.) I said that was perfectly reasonable. And that the next time the roof leaked, we would call out a roofer and have him completely re-roof the building, and deduct it form the rent. (This would be, at least, tens of thousands of dollars). In California, residential tenants can do things like that, perfectly legally, especially when there is a safety issue. Commercial tenants, as a rule cannot. But in this case, I could have made it stick.

The next day, we had an electrician out, who fixed our sign. And they had a *roofer* out, who fixed the roof, and it never leaked again. And after that, we got along with the management company just fine.