Am I The only One Who Cringes When People Try On A Bunch of Hats?
Awkwardly Placed Stickers: This Does Not Belong In The Kid's Section 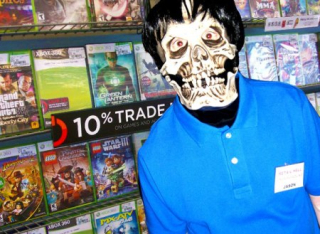 No, we cannot sell Fifa 17 yet. We don’t have the OK from the higher ups to do so. No, no Fifa 17. If one more person asks about freaking Fifa 17 Lightning will STRIKE YOU WHERE YOU STAND.

That’s pretty much the hell I went through yesterday at work. Fifa 17 is getting released on the 29th and they still ask two days before, if we have it and will sell it. No, we will not. I cannot do a release break, the consequences are not worth it. I don’t care if you preordered, I will not hand it over.

I mean, I can understand being super excited about a game’s release and you’re looking forward to it. I was like that with Lightning Returns and recall bugging the employee (for what it’s worth, I am ashamed of that by now). Course, then I played the game and realized the English translation was mediocre crap and am now basically sticking to my first-gotten Japanese version of the game.

But I digress. Yesterday, came in and was already feeling bad from a cold and pukey, but we are short-staffed right now and I was needed. My co-worker already said, “Do not bother answering the phone, it’ll just be people asking over and over if Fifa 17 is out” and he was right. Ditto with most of the customers coming in asking about Fifa 17. Either way, this is basically what the entire shift went down like.

“No, sorry. We haven’t been given permission to sell it yet.”

“No, sorry. We might get the OK tomorrow, otherwise it’ll have to wait until Thursday.”

No shit! A game being released on its release date? What are the odds?!

I even started answering the phone with, “Stopgame (Location), Fifa 17 is not out yet”. Course, nobody listened. One more reason why I stopped answering. Especially since any preorderer knows that WE will call THEM as soon as the game is ready to be sold. No need to call us, we’ll call you.

Yeah, we’re the special little snowflake that’s different from everyone. If you do not have a preorder and really want the game, buy it from somewhere else. I’ve had people even cancel their preorder, get their prepayment back (you need to pay at least 5€ ahead for a preorder, though you can do more) and go somewhere else. Not my problem.

“Can you make an exception? Please, just *whistle* under the table?”
The second guy that asked that was given A Look.

Nope. I cannot be bribed, especially if I wanna keep this job.

End result: I wasted six hours answering the same dumb question. And lost my voice.
Also, I can still hear the phone ringing in my head…

I would've answered the phone with a little white lie. "Thank you for calling Stopgame. We will receive Fifa 17 on (release date.) It will be available for sale on (same date.)"

I would've too, but we know crusties are ignorant!

Wouldn't surprise me if these same people go to the movie theater a couple days before a film is released and ask to see it anyway.

ShutterBug, hence I stopped answering the phone. I already lost my voice dealing with the idiots in-store, don't need to worsen it from the phone.