Awkwardly Placed Stickers: Then Why Film It?
Happy Hallothanksmas From the UK 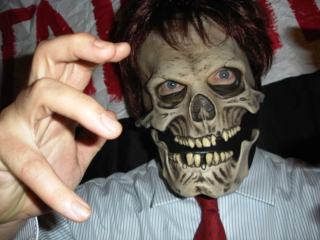 Three people came into our restaurant and asked about getting a job there. We were out of applications, as we were not actively hiring, but I told them I would get their information down and pass it along.

So they write their stuff down on a piece of paper, I take it to the office, and I bring out their food.

One girl complained about all her food- but not to me. I would come by and ask about how everything was, and she would kinda look into her food and mumble about how bad it was. It's not the best restaurant by any means sometimes people don't like the food- but they actually tell me. And hell, if you just asked for a job, you should pretend like you really like food. And she did this every time I came to the table. She cancelled her dessert, saying something about how she was afraid.

I'm already considering just ripping their information up... and then it comes time to pay. The other girl offered to pay for all three of them, gave me her card, then went outside to her car. I run he card and it is declined. I expect her to come right back in- since she would have to sign the recepit and everything- but several minutes pass and she does not return. I go to the guy at her table and tell him to tell her it was declined when she comes back. He tells me to take the first girl's food off and only run hers.

I am uncomfortable doing this. I don't like changing credit card information on someone else's say so, even if it's lowering the charges. It's probably fine, but it bothers me. I told him so, and he seemed vaguely offended.

I waited and she didn't come back in. I went outside, found her, and told her it wad declined. Both the girls came back in, split their food up ($50 total) and paid.

Went into the back and ripped up their information.

I dunno, might do them good to work there for a while...
Too bad it would probably suck for everyone else.

Seriously, if you don't like the food at wherever you wanna work, why do you want to work there? How would you be able to recommend anything?