Creepy Custys: Learn About Me, I'll Quiz You On It 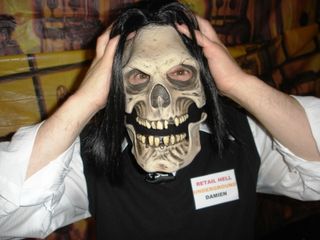 There is a guy who comes into the grocery store I work at every once in a while. He is at least sixty, but probably older. Every time he comes in he gets just a little bit creepier.

The first time he came in, he seemed like a nice guy who wanted to be a little more social with the cashiers. We got to talking and I don't remember exactly why but he gave me several news articles about himself and told me to read them because he would quiz me on them the next time he saw me. Not to weird in context for whatever reason. . . . Until I noticed he wrote his home and cell phone numbers on the articles while I wasn't looking.

The next day, when he came in, he asked if I had read then and I said that I had. He told me to visit his private museum mentioned in the news articles (I obviously didn't go).

For the next month or so, I would see him around once a week and as I said earlier, he continued to get creepier.

All the way up until this morning.

Today he was checking out his groceries as I was buying a bagel to eat before my shift started. He said something along the lines of "Well blemaker, you're a hard man to run into. Wait right there, I have a book for you."

He then proceeds to ruin out to his car and back inside before I even get through the line and buy my bagel. He asked me for my last name and without even thinking I told him and immediately started cussing myself out inside my head for saying my real last name. I looked where he signed it and he had written me a note before hand talking about how he had written this book and how he would like to become better acquainted with me.

Right next to that he had his phone numbers and the new addition of his address. (The book he gave me says in the bio that at the very least he has an adopted child and wife.)

Good god, I think you met the person Gilderoy Lockhart is based on...

There's only ONE Gilderoy is based on?

He has an adopted wife?