It Was A Dark And Stormy Halloween Hell At The Mall 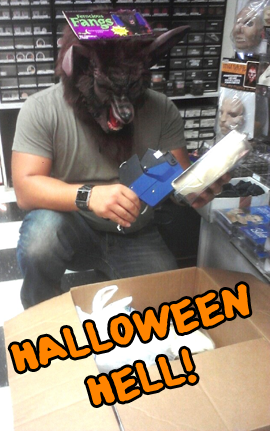 The bookstore that I happen to work at is near an entrance in what is basically THE mall in the town I live in. It is the closest thing to "culture" that we have - and while it is normally hellish enough on the weekends, it's sometimes downright dead during the week.

The mall normally holds a Halloween Trick or Treat event that has the stores pass out a fair amount of candy to a fair amount of children. Usually a decent turn-out, and the mall hosts what is a nice event for somewhere just under 500 young kids in cute costumes.

Well, tonight it stormed like a bitch, and thus Halloween night is, essentially, cancelled for the night for all of the kiddies in the area. If only there were an enclosed space in which the brats could all beg in a mumbling manner for candy...

Well, as it turns out, EVERY parent - as well as, for some reason, a handful of ridiculous teenagers - got the same idea and turned out to the mall to badger the shops into giving their children candy. This had become so very huge that when I walked into work, I was immediately told that I was in charge of handing out candy to the children. Going to the mall side entrance of the store, I stood next to a co worker who had already been there and began handing out candy. I was under the impression that he would be joining me. Uh, as it turns out, that wasn't fucking happening.

He disappeared sometime after he got a refill on the candy, and I was left, alone, a few times when I was out of candy and had to handle telling children and their parents that I had run out. Most people were pleasant about this rather reasonable set back, but then there was the minority of smegma who rolled their eyes and had the nerve to expect something out of the charity that a business is giving to their children. "Well, you guys should have expected this turn out, with it raining outside."

Thirty minutes in - my co worker, who had been sent out for a "candy run" to the ridiculously over priced boutique in the mall was no where to be seen, and in a surreal way that you'd think that you'd only see in a movie like Brazil, the line of children who were waiting for a single piece of friggin candy stretched allllllll the long way down the hallway that separated the book store on one side to the coffee shop and the rotunda. Holy Christ you would have needed to see it to believe the amount of two-year olds in cheap princess dresses and boys wearing off-brand Scream masks to know what a sheer, children-orientated panic feels like.

I believe that this must be a good deal what it is like before and after Christmas Day for a Build-a-Bear employee. Christ are people who work with kids on a day to day basis much more patient than I will ever be.

My co-worker returned some time later with $15 worth of candy that came directly from out of my manager's pocket. It was small, fruit-flavored tootsie-rolls that I was instructed to give no more than one to every kid. This later got supplemented with Halloween-themed stickers and temporary tattoos.

This, unbelievably, ran out, an hour and fifteen minutes into what was supposed to be a two hour long event, with all of the children in attendance doing nothing more than standing in the sort of line that would only be normal for a Harry Potter midnight release. Not for a single. Piece. Of. Candy - or two stickers/temporary tattoos.

Thankfully, the unchangingly looooonnnggg line of people dissipated with little grumbling - although almost none actually went into the store to at least browse. They took their candy and left, leaving the store a complete ghost town by the time I got back to my actual work for the night.

Was it worth it? - Well, for a child hater like me, I was overwhelmingly surprised at the good manners of most of the children in attendance - a lot of warm smiles, Happy Halloweens and thank-yous - and the most trouble that I got was from parents who thought that a good Halloween memory for their children is to have them stand in line for a single piece of candy, handed out by a sweating, nervous book store employee.

I loved seeing the homemade costumes, but I kept a mental count of Minecraft costumes that came with big, cardboard-box heads at a magnificent four, with children dressed in the trademark scraggly beard and camo cap of some cast member from the TV show, "Duck Dynasty" at a strange ten.

The "extra" buckets that some adults thrusted at me as I tried to give each kid attention made me want to breath fire on the entire event - some of them at least had the grace to mutter something to me about a phantom "sick child" who was unable to attend the event.

The moral of the story - do not depend on a mall to give your child all of his Halloween candy. It's unfair to both your children and to the stores who have to waste time and money distributing it to them. If it's storming bad on Halloween, maybe just buy them a shit ton of candy and stay somewhere warm with them.

Fun fact - later that night, a group of adults and a two-year old that had gone into the children's section, and later on the mother of the two-year old rushed up to me, holding her squalling child, asking me where the nearest restroom was. As I was telling her about the store's restrooms, I realized that the child was fucking bleeding from out of her lower lip in a steady stream. As she walked away, I could hear the woman scolding the child about freaking out, when she had hurt herself. Later on the night, I saw the group leaving, deep in conversation over the prerequisites for their insurance company on getting stitches at a hospital.