Sinister Signage: Well That Was... Oddly Specific...
Customer Reject of the Day: Ice Cream Is More Important Than Smelling Good 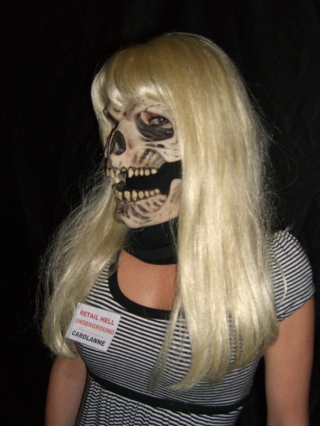 This happened last night while I was at work.

I was standing near my counter at the electronics department, when I noticed our LP intensely staring at a girl. I made eye contact with him and he gave me a nod, so I knew we'd have a thief on our hands shortly.

He approached her the second she left the store (located in a mall) and she didn't put up any fight.

Turns out she had make-up in her purse valued at around ~500$, so it was a big catch. She quickly admitted guilt and police along with her parents were alerted (she was below 18).

Here's the kicker.. One of my co-workers recognized her, because she worked in a store almost next to us in the mall, so we obviously walked over there to have a chat with her manager. Turns out she was scheduled to work, but had called in and said she was 20 minutes late.. which she was because she was stealing in my store!

What do you need 500$ worth of make up for? You that ugly? Or trying to resell it?

If you're getting it free anyway, why not stock up?

Actually, it's VERY possible for only a few items to add up to that much if it's the more "high-end" stuff such as, say, Urban Decay.

Lies to her boss then gets caught stealing. Tsk tsk tsk.

On the bright side, she DID call in late - how courteous!

And I'm sure she'll have plenty of extra time on her hands to practice her larceny skills, since I'm sure she's unemployed