Black Friday Sales Hell: Knocking Down A Bunch Of Women To Save Christmas I didn't work at the store, but I was dragged by a friend of mine to Walmart to help him get a T.V. on Black Friday a few years ago.

Let me start by saying that I don't even particularly like crowds. I am also not a violent person. I had heard lots and lots of Black Friday horror stories, and had done pretty well avoiding them. However, about 6 years ago my friend asked me to help him get a second flat screen television for his family since, at the time, Walmart had a policy that a single person could only reserve one item before midnight. That sounded pretty alright. I mean I just walk in and say I want the item. Simple as that.

I was wrong. Dead wrong.

I show up at my local Walmart and there are people EVERYWHERE. I live in Tennessee, and everyone is pretty serious about Walmart here. These people though were the worst of the worst. Several of them looked like they hadn't seen daylight since last years sales.

Anyway, I make my way through the crowd of southern fried faces and scoot through to the television section. We are informed that there are only two of the televisions that my friend wanted left on the reserve list. Awesome. We tell the woman that we want the televisions, and she just sort of laughs. She then informs me that we have to reach over other people for hours and keep our hands on the televisions that we want. When midnight rolls around, they will unwrap all the items and tell everyone to 'go' and that is when we could take them.

This is where it gets good. We are waiting there for a couple of hours and we start to notice how many people are disappointed that there aren't any more of the TV that we have our hands on. Some women even started to cry. I obviously looked distressed with all the action going on, so two little old women who were next to me told me that it wouldn't be that bad. I would be out of there before I knew it. I smiled and thanked them for their kind words just as it was nearing midnight.

The employees removed all the plastic from the displays of boxes and wait for the announcement. The P.A. system overhead comes on and just says 'GO!!'. 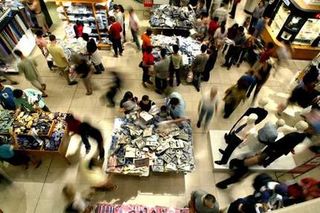 Then all hell breaks loose.

Apparently, all the people that were disappointed that there weren't enough T.V.'s had a plan. They just rushed over and started pushing people out of the way. They ran to the roped off other sides of the boxes and were trying to rip them away from other customers who had BEEN WAITING IN LINE FOR HOURS. Some of them were even succeeding.

I was kind of caught up in the moment and was staring at what was going on while being pushed on all sides. My friend grabs my arm and tells me to hurry and get my T.V. in the cart before everyone starts fighting. Just as I focus back into reality, a woman starts pulling on the other side of my t.v. box. I mean, she is really pulling it. I just hold on with all my strength and decide to just let them tire themselves out.

That's when I notice to two nice elderly ladies beside me. One was on the floor and was being stomped on by several other women trying to get to their televisions. The other was wailing and crying for God to help her.

God didn't help her that day, but I sure did.

While still holding onto my box with one hand, I reached into the sea of people and grabbed the television that the older women had their eyes on. I grabbed it off the shelf and started screaming for everyone to back up. That's when they started hitting me. Women were clawing my face, pulling my hair, kicking my legs, and doing everything they could possibly do to make me let go of the old ladies' television. I wouldn't. On the other hand, literally, several women were on the other side of my original box trying to pull it away from my grip.

I yelled out to my friend to help the older women up, who were literally being buried by women falling over themselves trying to rush up to the displays. As soon as they are out of the way, I just pull their television out, put it in the cart, and then grab my original box with both hands. I may not be a violent man, but I wasn't about to lose the original T.V. that I came in for. I got a great grip on the box and just pushed it towards all the women who were pulling on it. This caused them to all just fall in a big comedic pile on the floor. I made my escape from the sea of ladies, and proceeded to the check out counters.

Now don't get me wrong folks, it was awful and I have never gone back to a Black Friday since. I was covered in cuts and bruises, but it was all worth it just to see the look on those two ladies' faces. They were so grateful that I helped them get that television.

It was apparently a gift for one of the women's grandson. She informed me that she didn't have the money to get one that wasn't on sale price, and had brought her friend to help her get the thing. They were so happy. They were just hugging me and telling me how I saved their Christmas. They immediately offered me what money they had for helping, but I of course denied it.

And that is how I saved Christmas and knocked a bunch of women on the floor.

Sometimes taking action is the only course of action. You did what you had to and that's all there is to it.

"She then informs me that we have to reach over other people for hours and keep our hands on the televisions that we want. When midnight rolls around, they will unwrap all the items and tell everyone to 'go' and that is when we could take them."
...screw this; shit ain't worth it. I'm going home.