Restaurant Owner To Robber: "You have One Knife, I have Two!"
Customer Reject of the Day: Spidey Santa

Electronics Store Hell: The Not So Brilliant N.A.T.s 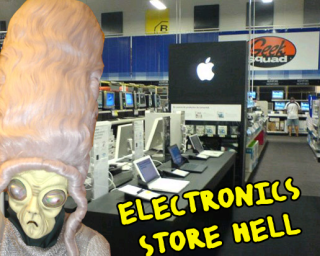 During my college years, I managed an electronics store. We rarely had people nick our goods, but this pair made up for it.

One fine Saturday afternoon, a couple of guys walked into the store, and instantly read "shady". Not just to me and the store owner, mind you, but to the civilians as well. One shopper came up to me out of kindness to let me know, and I nodded.

The show began: one guy tried to distract me and the owner with questions about the latest computer on one side of the store - while the other, rather unstealthily, started stacking stereo equipment near the front door. Pro tip: skulking and eye-darting is best left done to the pros.

Everyone is watching. The pair is oblivious to their obviousness. If I could have made popcorn for the audience, we'd have covered rent for the day.

Finally, the owner nodded me to the front. As the other guy was in the back preparing his next load, I had the pleasure of "noticing" the random pile of gear near the front, saying in a loud voice,

Me: "Whatever are all these boxes doing here? I had better restock them!"

And began moving them back.

They left rather abruptly, to laughter and applause.