Electronics Store Hell: "Well Can't You Help Me Anyway?"
You Had One Job: Those Look Rather Difficult To Sit On

Poll #2: The Most "What The Fuck Is Wrong With You" Christmas Titles! 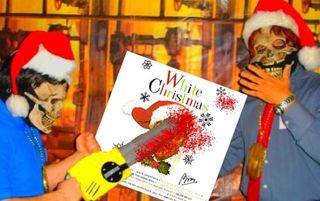 In my roaming for Christmas song titles I found some really horrible songs that I just can't believe were meant for Christmas! Take this as your "Trigger Warning" because... DAMN... If you choose NOT to listen to these songs and only vote based on the song titles, I won't hold it against you. I've added some comments after the song title and singer; either to sum up the horribleness or just remark on the ones that are obviously just plain wrong.

Send in your votes to: submit@retailhellunderground.com

(scratches grass on a steaming pile of Adam Sandler and buries it with the rest of the xmas music.)

Sorry, these all sound hilarious to me, but I have a twisted sense of humor. While we're on the subject

"On Christmas Day" by Dido

Lady meets a guy one day, he compliments her and says he'll be back Christmas day.

She gets excited, her family's excited, she thinks she's gonna be married...