Why Thank You Walgreens, I Try To Take Care Of Them
Sale Slip-Ups: Now *That* Is A Sale!

Starbucks Hell: Impatient Man Gets Angry Over How Long His Order was Taking, Screams "Trump!" at Black Barista and Calls Her Garbage

Around 4:30 p.m. today, Jorge de Cárdenas was getting some work done in a Starbucks on South Dixie Highway near the University of Miami. A group of people stood waiting in line at the counter for their coffee and snacks.

But one disgruntled white customer got so upset at how long his order was taking that he began screaming "Trump!" at a black employee. The man then claimed "anti-white discrimination" was to blame for his delayed coffee, called another employee "garbage," and threatened to punch somebody.

"He said it was 'anti-white discrimination,'" Cárdenas says, "so he started disparaging the staff. One patron called him an asshole, so he said, 'Fuck you, bitch.' That's when I started filming."

Cárdenas whipped out his phone to take a video just as the man called the black employee "trash," demanded his money back, and started shouting, "I voted for Trump! Trump! You lost, now give me my money back," at the staff:

In the clip, the man then walks up to the black Starbucks employee and calls her "trash" yet again before asking for her name so he can report her to Starbucks management. 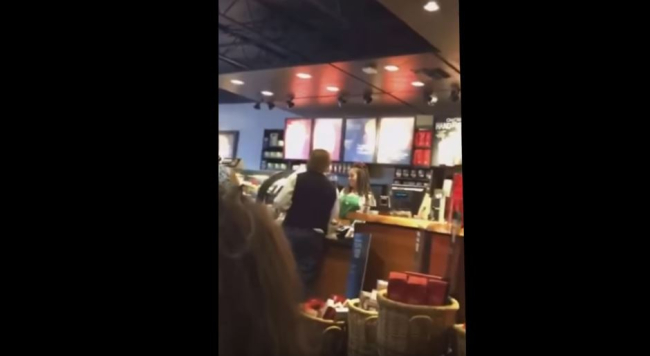 One patron then got particularly offended at the man's comments.

The two men then engaged in a war of words for a full minute in the middle of the store.

Cárdenas says the two men "almost came to blows." In the clip, the angry white dude threatens to "punch out" the other guy before storming out.

Though relatively innocuous, the ordeal in a Miami coffee shop mirrors a frightening trend nationwide: People of color across America have reported a rash of hate crimes since Donald Trump's victory eight days ago. A significant portion of the hate crimes have been directed toward Muslims. During Trump's 60 Minutes interview over the weekend, even Trump himself asked perpetrators to "stop it," though his appointment of the racist-enabling strategist Stephen Bannon makes his plea sound somewhat hollow.

"The funny thing, besides just the concept of 'anti-white discrimination,' is just yelling 'Trump!' for no reason," Cárdenas says. "Like, dude, you won."

Except, you got it backwards. The majority of the hate crimes have been committed by Clinton supporters against Trump supporters.

Actually, I wouldn't trust the news as your one source for who does what. Social media has been exploding with sexual assaults (you know, grab em by the Pu**y) and actual physical assaults, plus harassment and verbal assault over hijabs, ethnicity, or sexual orientation. These don't show up on the news because they're not Pro Trump: Hillary is the hate cow that everybody in the news likes to milk.

So far, not being american, only cases I have heard is one alleged Trump Supporter who got physically abused.... for road rage, rather than for Trump....
And have heard and saw way more videos against minorities (seriously, kids yelling "Build the wall" ??? ) rather than against Trump supporters....

Of course, in social media we will hear more of minorities being attacked, not because (probably, but wouldn't bet my ass on it) they're the most targetted ones, but rather, because it's way more empathic to read about the mexican guy being bullied just because of his skin, rather than the Trump supporter with full South Flag, "Build the wall" stickers and MAGA hat being bullied only for his vote.

It's all getting very A Handmaiden's Tale out there in US Land.

Herpetarium, ditto here. Our German news isn't full of Trump, but he has been mentioned more recently; including the one where Hillary supporters have (mostly) been protesting peacefully or focusing on Obama and his big farewell tour.

Molly, it certainly is.

he more we fight amongst ourselves, the worse things will get. It's not until we all accept each other as we are and stop dividing ourselves by color, religion, gender, sexual orientation,and etc, that America will be great again. That's what Trump does not get, and what most people seem to be missing the point of. One people. Americans. Be proud of your heritage, by all means, but do not use it to set yourself above others of different heritages and beliefs. That's what people like Trump, and the powers that be that are behind the throne, that we never see want. They want us fighting amongst ourselves, their biggest fear is a unified people, because then we would have the power. The power to oust them, to put an end to their greed and tyranny
*Climbs off soap box*
Sorry this has been my sore point for some years, not just this election, but this election seems to highlight it
"One Nation. Only then will we "Make America Great Again"
And that's by all of us, the common people, standing together as one, without regard to superficial differences
We're getting screwed, and we're allowing it to happen because we're all focused on each other and superficial differences