Sidewalk Signage: You Are What You Eat...
Netflix Fails: Likeable Detective Confusion 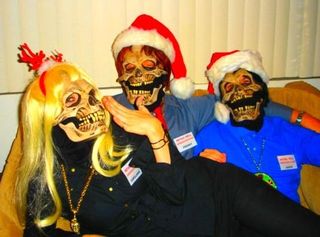 BACKGROUND: I own and operate my own retail store. It's actually a seasonal fireworks tent, but not like any fireworks tent you've seen before. It's 2400 square foot of fireworks heaven.

Two years ago, a woman stopped in to get some stuff to give to her kids as Christmas presents. She had two boys (8 & 15) and wanted me to help her pick out some stuff. I showed her some of the smaller things, but she actually ended up buying a big mortar kit for the kids, figuring that she could help them light them off and it would be more impressive.

A few days after Christmas, she came back and told me this story:

It was just her and the kids, and they had had a great Christmas. She thought her younger son would be excited by the fireworks, so she’d let him open it, but after he had ripped off the wrapping paper and seen what it was, he didn’t really say anything about it.

She was sitting across the room from him, and asked him what the present was that Santa had gotten him.

He mumbled something and set the box aside.

She was a little disappointed that he wasn’t more excited, but she didn’t say anything and they continued ripping open gifts.

Later that morning, after the gift hurricane had died down, she decided to ask him about the fireworks and went to grab the box. She couldn’t find it in the pile of presents and she didn’t see it in his room. It’s a good sized box, about 3 ft tall and 18 inches wide, so it shouldn’t have been hard to spot.

She asks her son about the big box that Santa had gotten him and he just shrugged his shoulders.

It turns out; he had hidden the box under his bed. When he'd opened the present, he had quickly reasoned that if his mom found out that Santa had given him a big box of fireworks, she would take them away. He had played it cool and hidden the box when she wasn’t looking.

Truly a child after my own heart.

OMG...that precious child! I hope those parents nurture that belief in Santa for as long as possible. That is adorable. Play it cool and hide the evidence.

I still believe in Father Christmas.