Customer Reject of the Day: Kitty Before Dessert
It Looks Like A Typo, But I Don't Trust Hotels Enough To Risk It

Delivery Hell: Scared The Crap Out Of Me 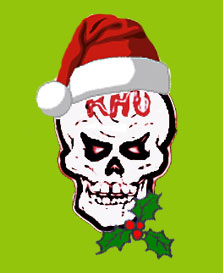 I delivered pizza for Pizza Slut for almost a year and most houses were fine. Some didn't tip, some did. Some were rude, some weren't. However, there was always one place scared the beejezus out of me.

I get an order to take a couple pizzas and whatnot to this address I'd never delivered to a couple months in. I drive there, but can't find the street sign and the phone's GPS (it's only so much help in the rural areas) is telling me to take a turn into a forested area with no discernible roadway. I'm driving around for 15-20 minutes trying to find the right road to turn down and repeatedly calling this customer. I finally stop where it's telling me to turn and get out and walk to the side of the road with a flashlight and see the narrowest dirt "road" winding into some trees.

I assume this is it and pull in, and after a minute or so of slowly driving with the high beams on, I pull up to two identical trailers in the middle of the woods. One on the right, and one on the left. There are no numbers, and this guy is still not picking up. There are no lights on in either house and, eventually, I decide I'm not ready to die and decide to take the pizza back and say they never answered.

I lean into my car to grab my phone to call "HQ" and when I stand back up, this dude is standing on the other side of my car, staring at me. He didn't make a single sound walking up to my car. Scared the fuck outta me because it's like he just appeared. He looks like Vince Neil if he were a vampire. Dirty, long nails, heavy-set mouth breather.

I'm paralyzed, my brain trying desperately to shift from "gibberish in neutral" into "something, anything, as long as it's in motion."

He just plops wrinkled cash onto the roof of my car, walks around and gently takes the pizzas from my frozen hands and walks off into the darkness. He didn't even head to one of the houses.