Toys R Us Has A Generic Position For You
Store Window Wonders: Boy Imagine Leaving The Snow Lodge And Finding This Bad Boy Looming over You.... 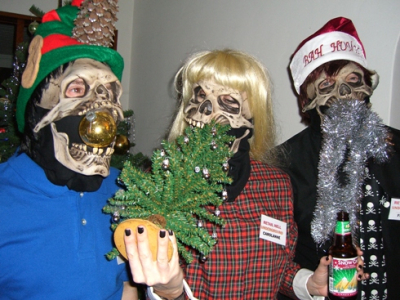 From Defenestrationism, Tales From Retail:

Working at the pet store the other day: "No, that particular fish has it's own personal (piscenal?) bubble of fresh water which floats around with it..."

...inside the saltwater," is what I really wanted to say to the customer, but being a smart-ass can be risky, as the rest of you likely know.

This interaction started with them asking me about a fish in a large display tank, whether or not it was saltwater. I told them it was.

Then they point to another fish IN THE SAME TANK and asked if that one was too. How do they imagine that works?

How could one possibly keep fish requiring freshwater in a tank which is saltwater? I get at least two people a year who do this, and they're being dead serious. The disconnect in logic is astounding.

"How could one possibly keep fish requiring freshwater in a tank which is saltwater?"
I have to think of when Homer had a lobster; least, I think it was that episode. He kept it in the tank along with the fishes and was told one needs salt, the other fresh water. He proceeds to altnerate between putting water and salt in, to get the right balance...

I overheard this gem one year (in a jewellery shop):
What's the difference between freshwater and saltwater pearls? Is one, like, plastic?
My hand itched to Gibb-slap him.