Grocery Store Return Hell: "Oh, you said 'no?' Allow me to hunt down someone who will say 'yes." 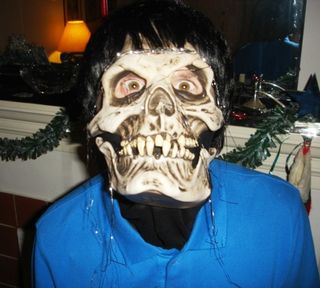 From Mina_Nidaria, Tales From Retail:

This happened the other day and I'm still peeved about it.

At my grocery store, our return policy is that for rturns over 10 dollars, you have to have a receipt. This has only come about because we've had fraud issues, and I make it a point to apologize and explain this to everyone looking to do a return.

Normally people are ok with this. This woman, apparently, was not.

She came up with some weird half battery, half light bulb thing. Being a battery-ish thing, I knew it was going to be expensive. So I ask her for a receipt, to which she says she doesn't have one. Well, damn. She believes it's over 10 dollars, so I ring it up, and sure enough it's nearly 14. I apologize and tell her I can't do the return as per our policy, and she is obviously is disappointed. There's nothing I can do about it, so she walks away, leaving me with this little gem:

"So you're leaving me with no option."

I mean, I'm sorry lady, nothing I can do. I thought that was the end of it. I was mistaken.

She comes through my checkout line later and explains that she talked to my fellow manager back by dairy, who told her she could get a refund. And I instantly get steamed. She had gone behind my back after being told no, and of course I got overruled. I didn't give her cash back and instead treated it as credit towards her order.

Later on I met up with the other manager that had ok'd the return. From what he said, she hadn't said a word about being told no earlier, so I can't really blame him. I'm far more annoyed at Ms. Can't Take No For An Answer.

"So you're leaving me with no option."
Shoulda kept the receipt.

"From what he said, she hadn't said a word about being told no earlier,"
That doesn't MATTER, manager! You have the rule 'return over 10$ needs a receipt, PERIOD', you stick to it. If it was 1 dollar or even 50 cents over the limit, I might understand bending the rules a bit, but for this much?

God we have a returns crusty just like this. She comes in multiple times a week (like, 2 to 3 times at least) and almost every time she's got something to return from either her previous trip to the store (Oh, I didn't need as much as I thought I did! or Oh, it tasted funny so I'm bringing it back, etc) or she'll have returns from what she claims came from our sister store down the road because she oh so sillily (yes she says this) let her husband shop without her and her sweet dumbo bought the wrong things/wrong brands/etc.

Thing is, more than half the time she doesn't have her receipt (especially if it came from one of her supposed husband's shopping trips) and she'll always be at the amount that we'd need a receipt to credit/process the return. And we all really hate it but we'll almost always do the return for her. Because if we don't, she'll go around following the assistant managers, crying some sob story about how she was in the hospital recently for some surgery or some other emergency (at the rate she's going though, she's probably been through more surgeries than freaking Frankenstein's Monster), holding our assistant managers up and keeping them from actually doing their jobs or she'll time her visit right to catch our store manager as he's heading for home and he'll tell us to give her the credit just to get away from her (I don't blame him, this woman's worse than an emo koala).

What also pisses us all off is that we heavily suspect she shoplifts. We just haven't caught her with definitive proof yet.

"crying some sob story about how she was in the hospital recently for some surgery"
Ma'am, with the amount of surgeries you require, I am surprised that you have not been assigned a 24/7 living assistant; you should get one, they can help you not take things you won't need.

"as he's heading for home"
Lady, I am off the clock and, as such, I don't need to give a rat's fart about you anymore. Now leave or I'm sueing you for harassment of me and every employee. (Seriously, you have a case!)

@Lightning Trust me, if we could permanently get rid of her, we would. Unfortunately we're a skeleton crew store, so it's easier just to give her her credit or refund to get her the fuck away from us than to actually address and deal with the problem she presents. Also, because if we don't get her away quickly, then she wants to 'chat' with us and she's been known to hold up the service desk for upwards of forty minutes just jawwing on and on about her week and how shit her life is currently.

I get back at her when I can though. One of the reasons she shops with us so frequently is that apparently she buys stuff for her workplace (creamer cups, coffee filters, keurig cups or coffee packets, etc and yet another reason we know she's a scammer) and she made the mistake of whining to me about how she was having to buy all of this out of pocket while I was cashing her out and I told her very pointedly that she should be talking to her work's HR about that because she can get reimbursement for it.

What made it funny is that she literally shut down and I could see her reboot mentally before she finally hemmed and hawwed out an answer about how she 'doesn't wanna cause trouble' and 'really, it's not that much' and 'she likes to help as she can' and I point out to her that this is a near thirty dollar purchase, she should seek some level of reimbursement from work. She kept mmming and ummming and turned to fiddling with her giant purse instead of really talking with me, which I found hilarious. So either she was lying about having to buy stuff for her workplace, she was actually using the company card to pay for it and was lying to me about having to pay out of pocket, or she just wanted to have a few more minutes of whining before she had to leave the store, or even some combo.

When we finally finished, I pointedly gave her the receipt and explicitly told her 'Yeah, just keep track of all your receipts and turn them into HR. They should be able to give you some king of compensation back.' She just took it with a mumble and took my bagger with her to help her carry her small two bag purchase out to her car. Which she always does, to a lot of annoyance.

My philosophy is always get it in writing. Manager wants to override the return policy? Manager does the return. I've seen employees thrown under the bus and fired for that when corporate came in, and of course, the manager didn't say hey wait, I authorized the return, the manager just stood there like a stooge and let the employee take the blame

Managers who throw employees under the bus to make customers happy have a special place in hell!