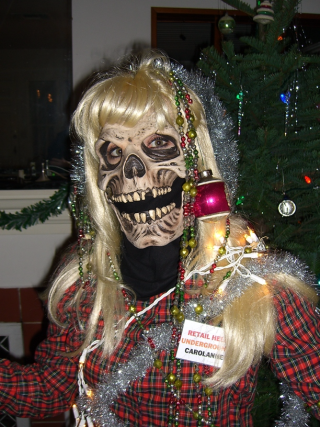 It's time for another tale from the bowels of retail hell.  Told by none other than Misty Meanor herself!

There's a middle-aged customer who comes in late at night.  At least once a week, at that.  And every time he comes in, he's always got nothing but discounts on his mind.  I've seen him around before, and I've seen him being helped by other retail slaves, and at least once I've had to deal with him.  Recently, though, I had the misfortune of dealing with him again.
He came in late at night, as usual, and the moment he got up there, he was blabbing about how things weren't supposedly ringing up right, how I wasn't doing things the right way, and how I had to bag things in certain orders because he was giving them as gifts.  Sheesh, will you shut the fuck up? If you want it that badly, then do it yourself!
Then came the part where he had coupons.  He didn't tell me which ones he was using, he just said he had a '30% off' coupon sent to his card, and then handed me a stack of coupons that he'd printed at the coupon center.  Instead of telling me which ones he wanted to use, he told me, 'Look at them and tell me which ones I can use!' I begrudgingly did so, noticing that there were not one, nor two, but THREE notices that the 30% coupon had been sent to his card.  That's strange because all the numbers matched, and you only get one notice for a specific coupon.  I was very suspicious of this.
Then I totaled it, and he said, "I want to use my 30% off coupon."
I told him it wasn't popping up.
He argued that it was there and to use it.
This went back and forth a few times until I got my assistant manager, and it was then that another customer told him that he was holding up the line.  The crusty just told him to back off.
The assistant manager and the crusty had the same conversation I did, while telling him that we couldn't manually enter coupons since it was against our policy (true fact.)  This went on for about twenty minutes total until the crusty finally purchased his items begrudgingly.  Afterward, he came back to argue with the assistant manager about how something appeared on his receipt.  I swear, this guy does this all the time.  He must be mentally ill... or just plain dumb.
For now, may all your custies have some sanity in them!
--Misty Meanor