Sidewalk Signage: Cocktail Pro Tip
The Calm Before The Storm...

Nasty Ass Thief Kids Get Confronted By A Soldier 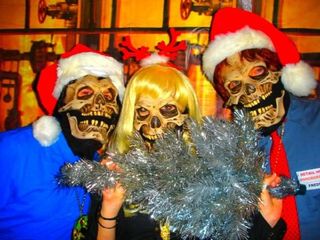 Background: Last year I was fourteen and lived with my grandpa in California for a year. When I wasn't at school or at home on the computer, I would be working at his locksmith shop as an "apprentice." He paid for everything and took me to and from school, so I gladly worked for free.

Story: My grandpa had just got done helping a soldier in the national guard: he needed to get copies of his keys as he was going to be away for several months and had someone watching his house.

As I was cutting his keys, two 16 or 17 year olds walked in. They needed a bike lock so they could go surfing and take their bikes. As I was cutting the keys and my grandpa was around the corner answering the phone, the teens decided to grab a few things off of a huge board out front that has tons of key and lock accessories.

They hid the accessories in their towels, and put the bike lock on the counter. The soldier noticed and walked up behind them. After they had paid for the bike lock and started walking away, the soldier started yelling at them asking if they were going to pay for the things in their towels. The teens immediately dropped everything and ran.

The soldier got his keys for free, as it was only $20 for the 8 keys. Way cheaper than the things he kept the teens from stealing, and it only cost us a couple dollars.