Theater Marquee Letting Everyone Know It's Not Its Past
Tip Jar Tuesday: I Suggest You Tip If You Want Another One 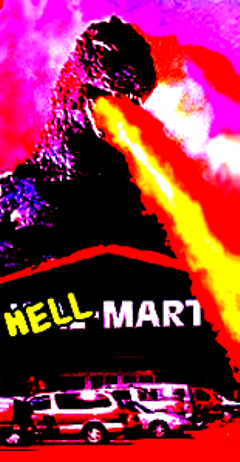 I used to work for Walmart, and at this time, was in the layaway department, and pretty much beloved by the managers because I'd come in early, stay late, work all the overtime they'd give me, do the crap jobs no one wanted to, etc.  It was my first job out of college, and I needed money.

I remember working one New Year's Day, and two of our salaried Assistant Managers were walking around the store giggling like school girls, arm-in-arm as they patrolled.  Mind you, both women were at least in their 40's, I'd venture to guess 50's is a distinct possibility, and they were known to be good friends outside of work as well as at work.  When they came past layaway all whispering and giggling, I asked what was so funny.  They told me to keep an eye on PartyBoy, a supervisor who had turned 21 not long before, and I'd understand why they were giggling.
For the rest of the day, I watched this supervisor, PartyBoy, stumble around the store, clearly hung over after what appeared to have been an epic New Year's.  The Assistants were making him climb into the rafters to change lightbulbs, they made him clean up the dustiest areas of the store, the hottest areas, any crappy jobs they could think of, PartyBoy got to do them.  And all the while, the Assistants were giggling away.  At one point, I walked past the Store Manager's office to see PartyBoy hunched over a trashcan, retching.
So I went back to the Assistants.  "Okay, he's sick....what's with the hard labor?"
The older of the two assistants smiled evilly.  "He lives in the apartment above mine.  Knowing that we both had to work at 9 am, he had a party last night.  A loud party.  That ended around 5 am.  I got no sleep.  So he gets no rest."
Karma's a bitch.  I wish I could say PartyBoy learned his lesson, but sadly, I don't think he did.  I have other stories about his parties, including one from a friend who WENT to one of them, and maybe I'll share them one day.....

I'm pretty sure that, even on New Year's Eve/Day, you can call the police and report a noise disturbance and have them force the party to stop, if the party is too loud and going on past 2 AM.

You certainly can Lightning. Of course the emergency services will most likely delegate that to the bottom of the list as they deal with drunk driving accidents, fireworks which start fires, assaults from drunken kissing of friends, friend's significant others, and exes, along with the whole host of other more life threatening outcomes as a result of a global party night. Also, depends on how loud the noise is from outside the building or in the hallway. In my building, you can't hear too many loud noises from inside the apartments from the outside of the building or the hallways. But the sound proofing between floors leaves much to be desired.