Dumbass Custys: $15 Diamond Rings
RHU Pet Peeves: You Say They Were Never Used, I Say "Your Pet Used Them, That Counts"

Bad Ads: A Bad Ad And A Rant

Travelers Insurance is running an ad in Inc. Magazine with the headline: “To catch a geek, you have to think like a geek.”

The advertisement says, “Fashion sense aside, today’s high-tech criminals are evolving constantly… Give your independent agent a call, and spend your time taking your business to the next level. Instead of worrying about a crook in ill-fitting pants.” 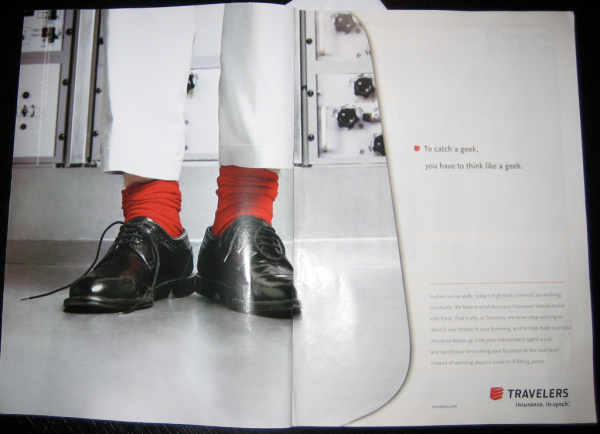 Am I nuts, or is this ad really offensive?

First of all, the implication that geeks are somehow a threat. The whole tone of the ad is that you need their excellent insurance because the world is swarming with nerds and geeks who are going to break into your business systems and steal from you. So buy our insurance.

Second. What is this, high school? With the bullies who fail all their classes have such an inferiority complex they have to make fun of the geeks? If this is high school, Travelers is the neanderthal jock beating up geeks for their lunch money. “Protection” money.

Third. I can’t really think of anyone less qualified to “protect” you from “geeks” than a bunch of insurance salesmen. Get over yourselves. Have you looked at your own actuaries? Have you noticed how insurance people dress?

Fourth. Can you imagine anyone more harmless than a geek? A skinny nerd happily entertaining himself playing Dungeons and Dragons, or quietly playing practical jokes on bandwidth-thieves, or laughing hysterically at reinterpretations of 19th century light opera? What exactly is the threat, fat necks? What are you afraid of?

I’m sorry, Travelers, maybe the Trump administration has given you the idea that it’s ok to make fun of the scientists, inventors, researchers and programmers who are creating the future, finding cures for your diseases, building the spreadsheets you use to figure out how much commission you’re making, and educating your idiot progeny. Maybe a know-nothing in the White House has given you the idea that it’s somehow acceptable now to poke fun of geeks and nerds, in big two-page ad spreads on the inside front cover of a magazine for founders of startups.

But you know what, morons? You probably forgot that most of the people that read Inc. Magazine are geeks. And they won't be interested in buying a damn thing from you.

I find the outdated-geek-attire to be funny. I've seen my share of geeks (I am one myself) and neither of the ones I've seen actually look anything like that stereotype. I have seen some that are very overweight, but for the most part, we're as diverse as 'regular' people.
I'm just waiting for the rest of humanity to realize that geeks and nerds are sexy. Intelligence is sexy.

Miami Vice pants, untied Men in Black shoes, and Xmas clearance socks are how the intelligent people dress? Some companies think even negative reaction ads are good for business, which is sad.

This seems more like a "do what I say" towards the ad company/designers. If we were on the 90/beginnings of 2000 yes it'll seem like ill intended.... but now, seems more like someone forgot the word "hacker" and went with the first word came to its mind despite what everyone else on the team said....
No need to get triggered at a bad advertisement...