RHU Monthly Themes: February 2017
Font Fails: Could Be Why They're Not Selling

Bad Ads: Assault, Stereotypes And Racism In One

This advertisement was used in the Netherlands; a vision of a white woman dressed all in white, grabbing an intimidated looking black woman dressed all in black aggressively by the face. The revealing clothing reveals both a suggestion of "sexy" to the very dominant behaving white woman, along with an inverted cross, the very stereotype of an atheist or satanist.

While Sony pulled some of its other, ill advised ads, the company tried to defend its White vs. Black campaign: "A variety of different treatments have been created as a campaign to either highlight the whiteness of the new model or contrast the black and the white models," a Sony spokesperson told Gamesindustry.biz. "Central to this campaign has been the creation of some stunningly photographed imagery, that has been used on large billboards throughout Holland."

Stunningly photographed or not, this combination of images isn't something to look up to when trying to attract buyers. A better use would have simply been all white dressed, bold looking, sexy woman in front of a plain black background, minus the inverted cross. 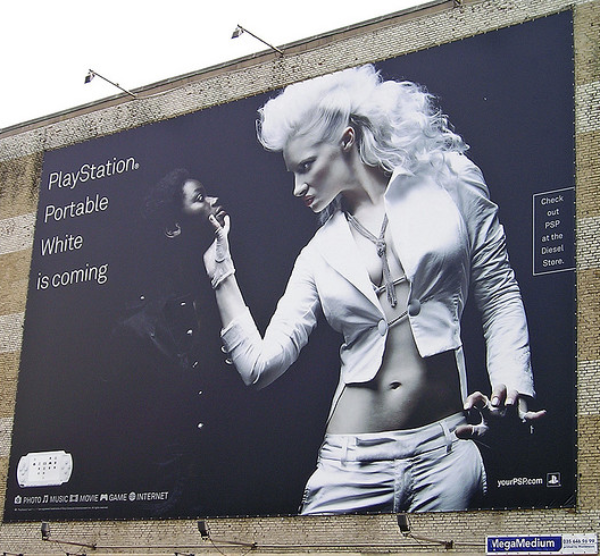 It's not an upside down cross, it's the bikini top string under her jacket.

Everything though? Yeah, disturbing, disgusting and revoltingly horrible.

....? This is pretty old, isn't it? And this is one out of a series of photographs used for the billboards. There were others up that people also got aggravated about (including one with the black woman appears to be strangling the white woman), this one is just the most famous.

Still, poorly thought out campaign all in all.

This is a pretty stupid campaign. It's not even good photography IMO.